I still remember my first Christmas stocking. It was blue with Snoopy skiing on it, made from one of those cloth kits where the design is printed on a sheet of fabric, then you cut out the bits and stitch them together. My brother had my stocking's sibling, which was red with Snoopy decorating a tree on it. They're probably both still in a drawer at my parents' house. I loved hanging the stocking on the end of the bed on Christmas eve and putting out mince pies for Santa and a carrot for Rudolph.

Fast forward several years, and now I'm excited about my children hanging out their stockings for Father Christmas. This is the first year that my son is big enough to be excited about Christmas and he will be using the stocking I knitted for his first Christmas. It's red with cream fairisle around the top of the leg and round the foot, a Debbie Bliss design. Obviously I had a little over a year to knit my son's stocking, but somehow didn't quite get round to casting on until December 18th, and finally finished it late on Christmas eve, just in time for Santa to fill it with presents. 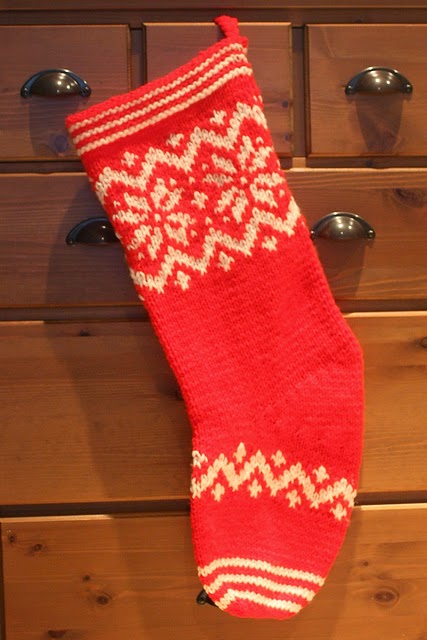 Of course I've learnt from this experience, and have my daughter's stocking ready to go for her first Christmas. Except that I haven't, in fact I haven't even cast on! I have made a stocking this year though...

A couple of months ago a friend emailed me to ask if I would knit a stocking for her daughter's first Christmas. She'd sent me a few pictures of things she liked: Scandinavian style striped fairisle stockings in red, green and cream, but not looking like the Italian flag. I deliberated for a bit about whether to go ahead and knit it, and in the end went with yes. Every child needs a stocking!

I chose a nicely rustic aran weight yarn, Drops Alaska, a 100% untreated wool (as it's a stocking it won't need washing very frequently, and the shade of red in that yarn was perfect, not too bright), and set to work charting some Scandinavian style stripes. 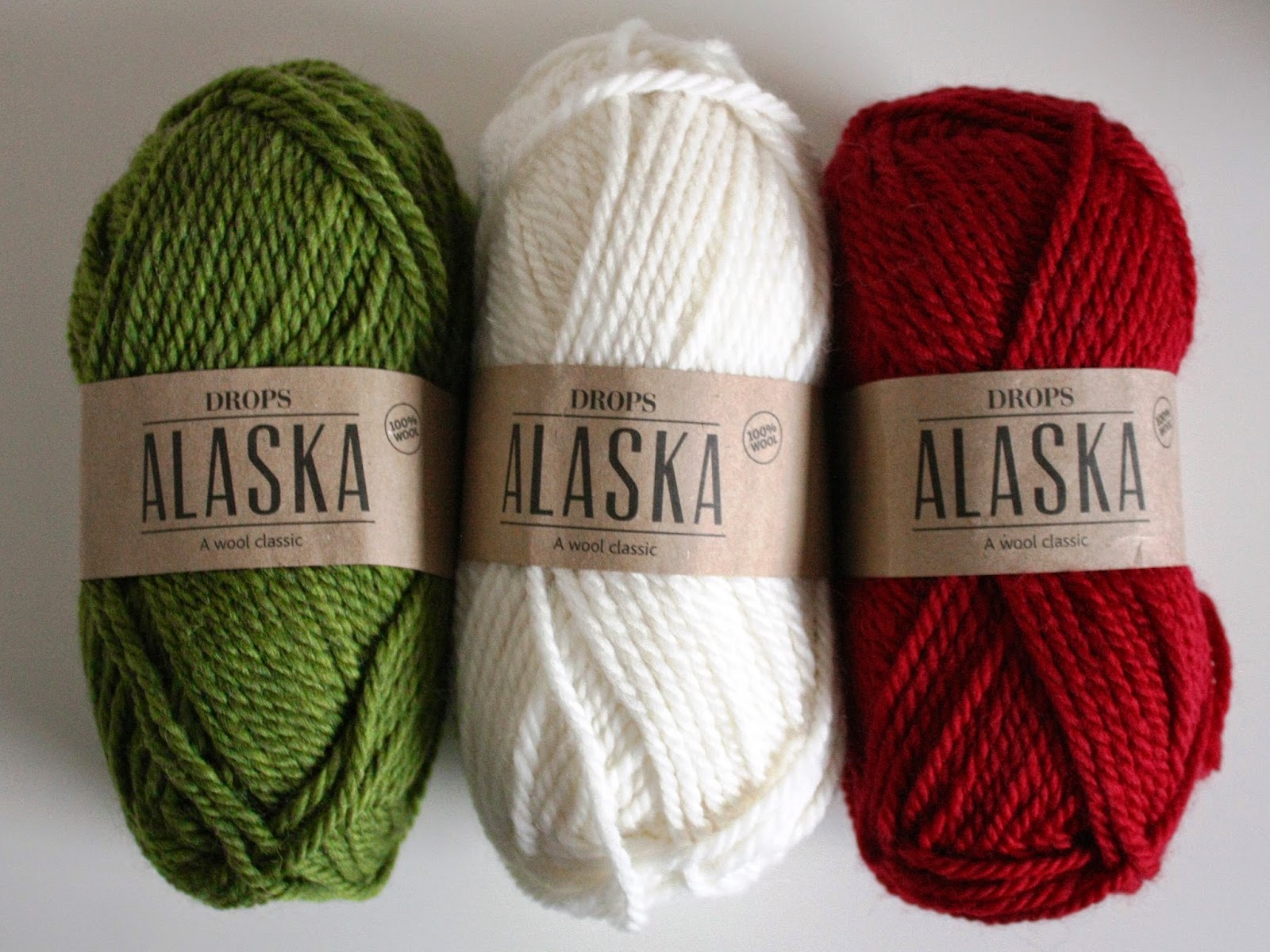 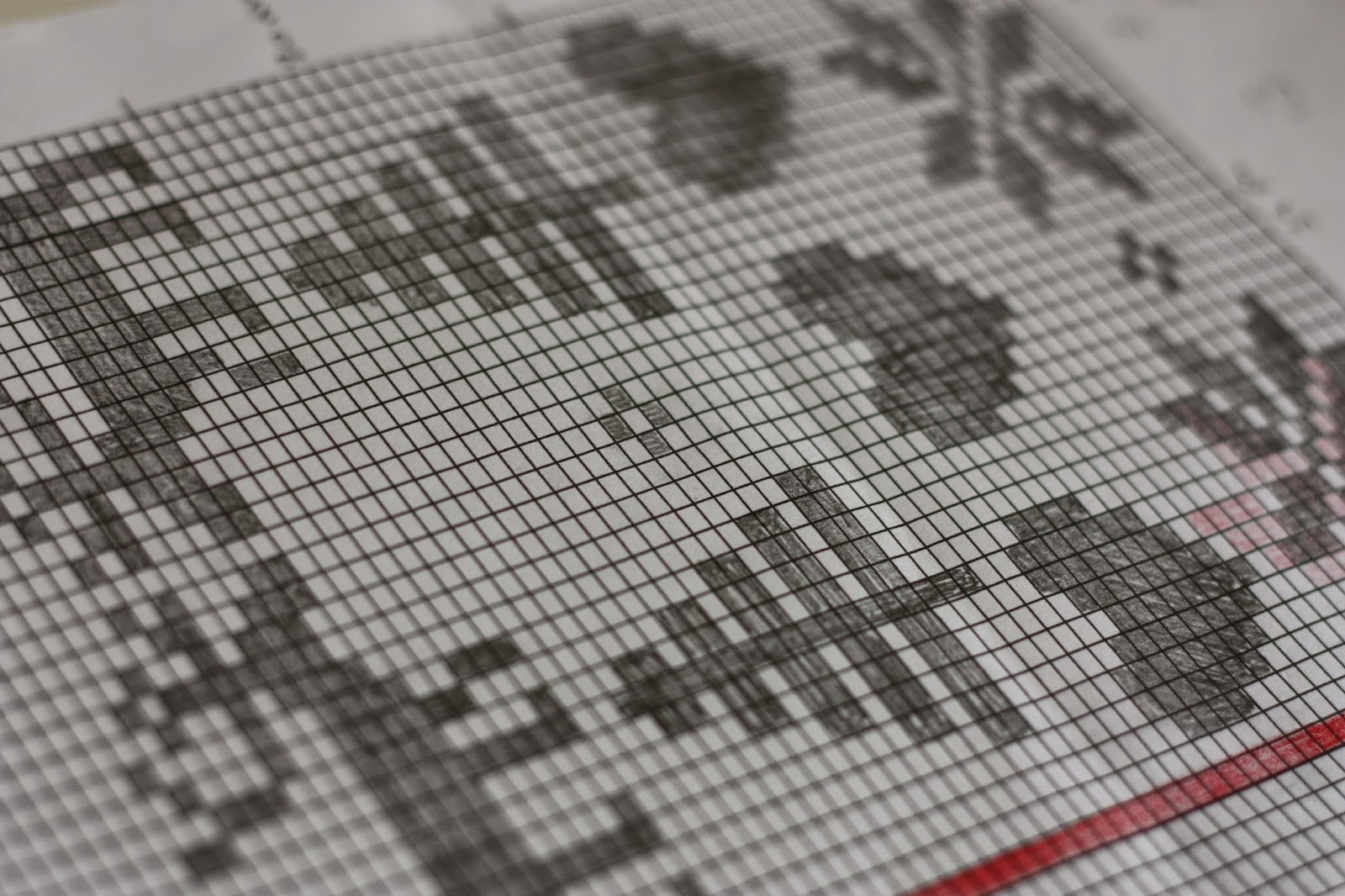 Once I'd worked out a few charts and decided which order to put them in, I got started on knitting the stocking. I don't have much experience knitting socks, so based my stocking on this basic pattern. I had to alter the stitch count a little to fit my designs on, but it did at least give me a starting point, especially when it came to the heel, which I wouldn't have had a clue on. The leg and foot lengths were entirely dictated by the widths of the stripes I'd charted (I shuffled the stripe order a bit so the leg and foot were in the right proportions). 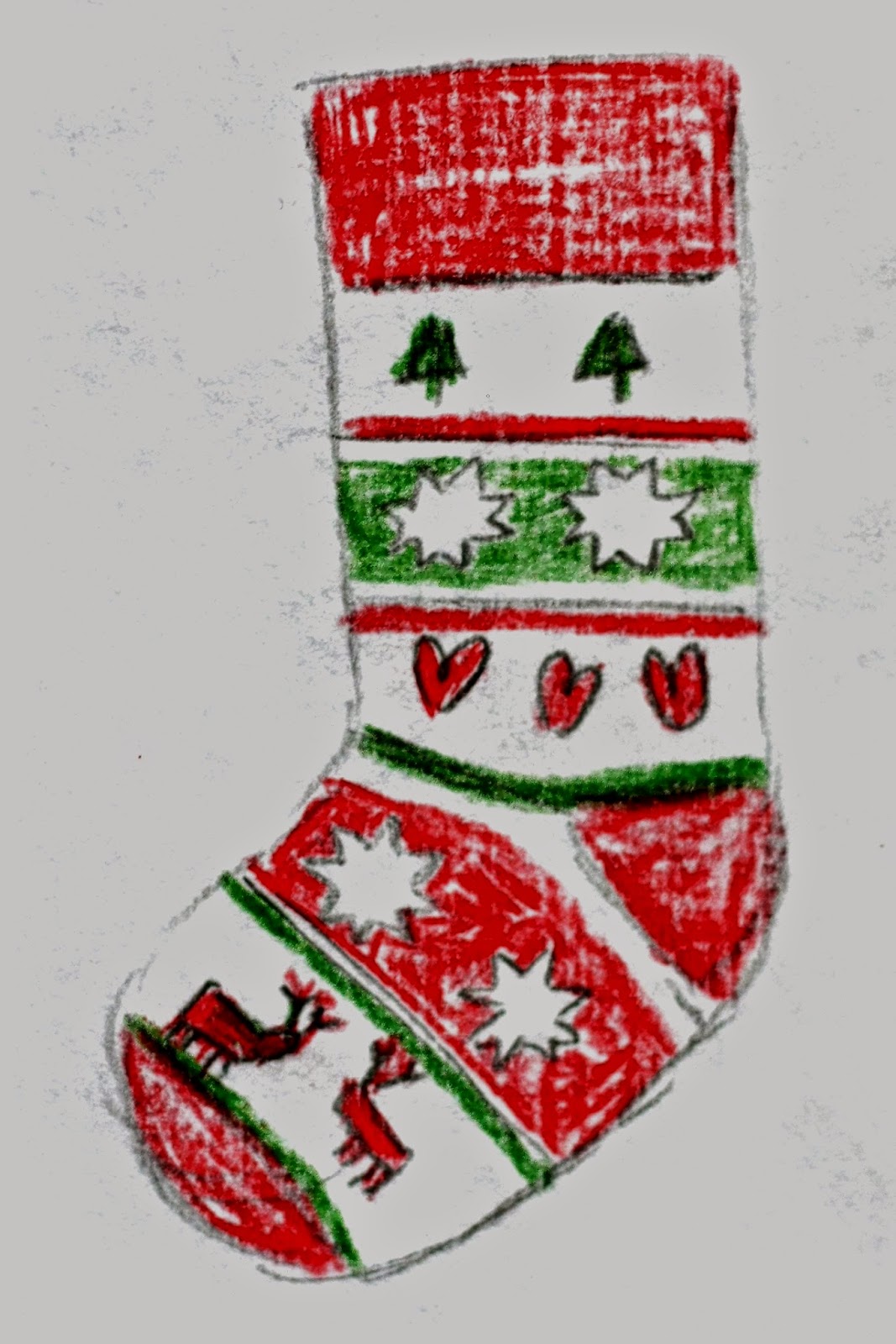 Knitting the stocking was really enjoyable. I don't often do stranded knitting, but managed to get the tension about right so it didn't pull in too much (I have been known to pull it all in so tightly that the resulting fabric has no give). Really annoyingly I ran out of red yarn about 10 rows from the end of the toe, so had to order some more and wait for it to be delivered (no one locally stocks it, so I actually spent almost as much on the postage and packing as I did on the yarn, it was at least the right dye lot though, so not entirely frustrating; I was very well behaved and didn't buy any other yarn while I was ordering). 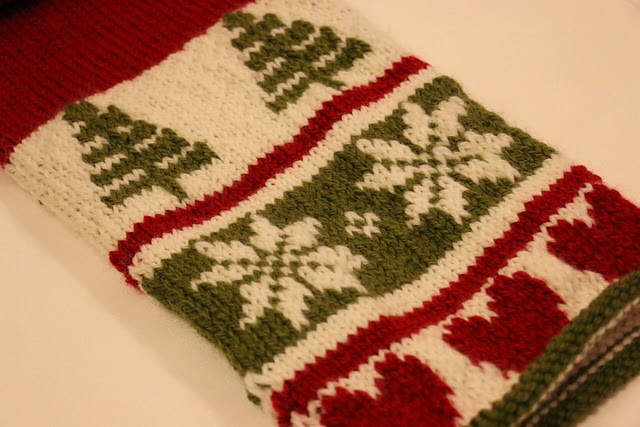 My friend had requested that I line the stocking to stop little fingers and odd-shaped presents catching on the floats, so I had to knit the whole stocking again, without the pretty bits, which was slightly less fun. My tension between the inner and the outer was a little different, so I had to adjust the number of rows for the lining. Once both parts were knitted I washed and blocked them to get them to approximately the same size, then I embroidered the recipient's name on the outer. 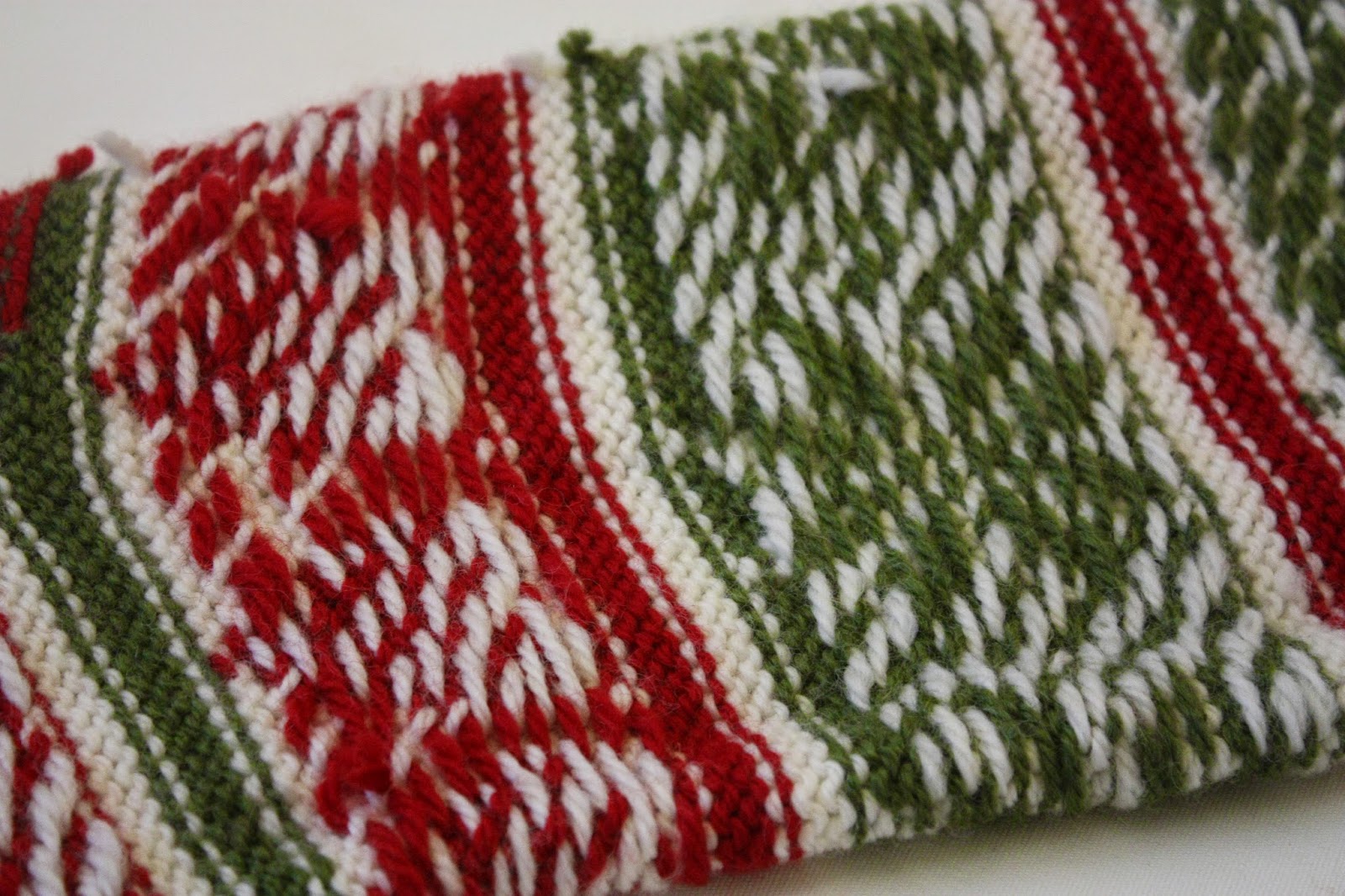 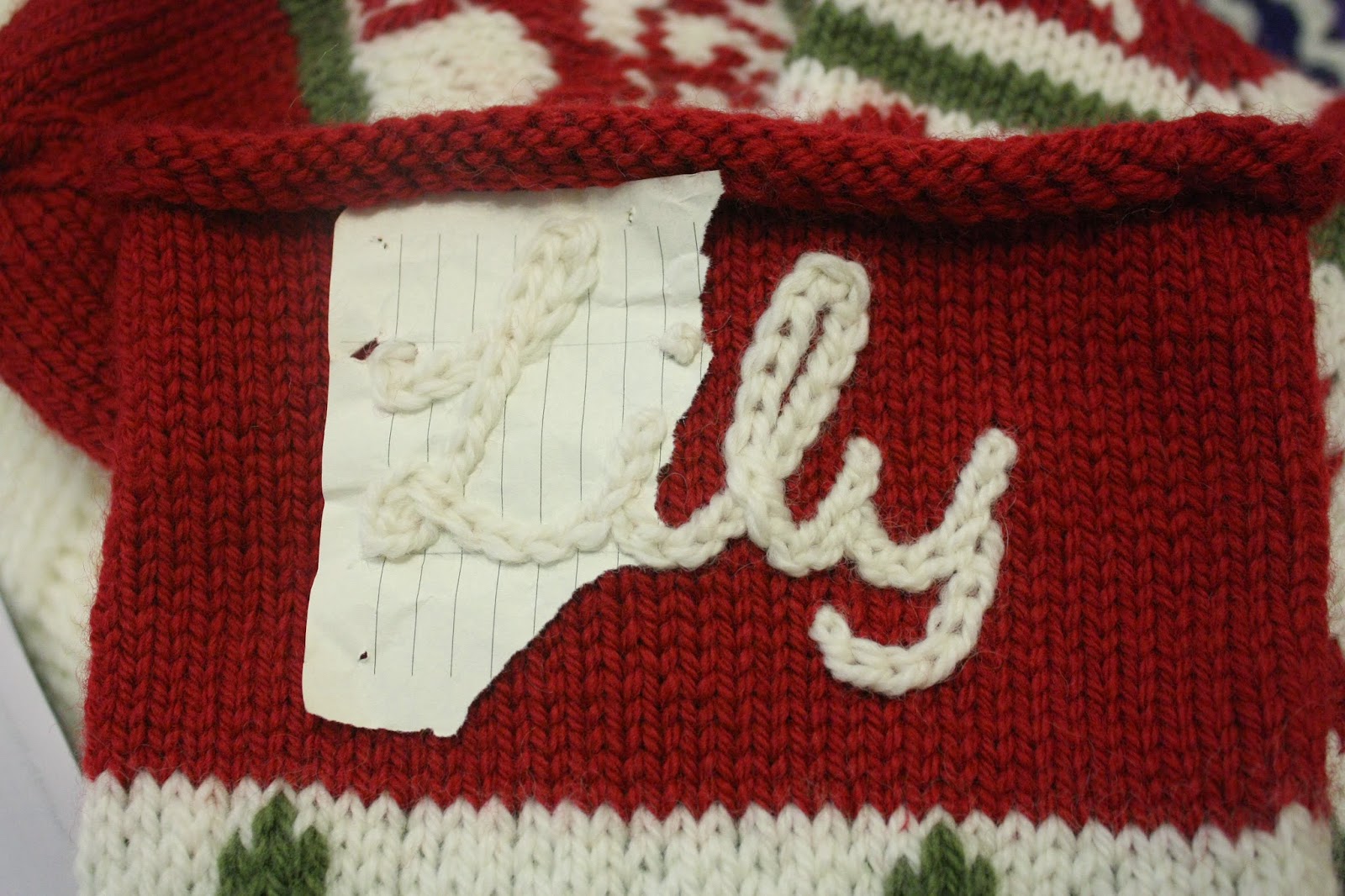 After the embroidery I mattress stitched the two pieces together, and voilà, one stocking! 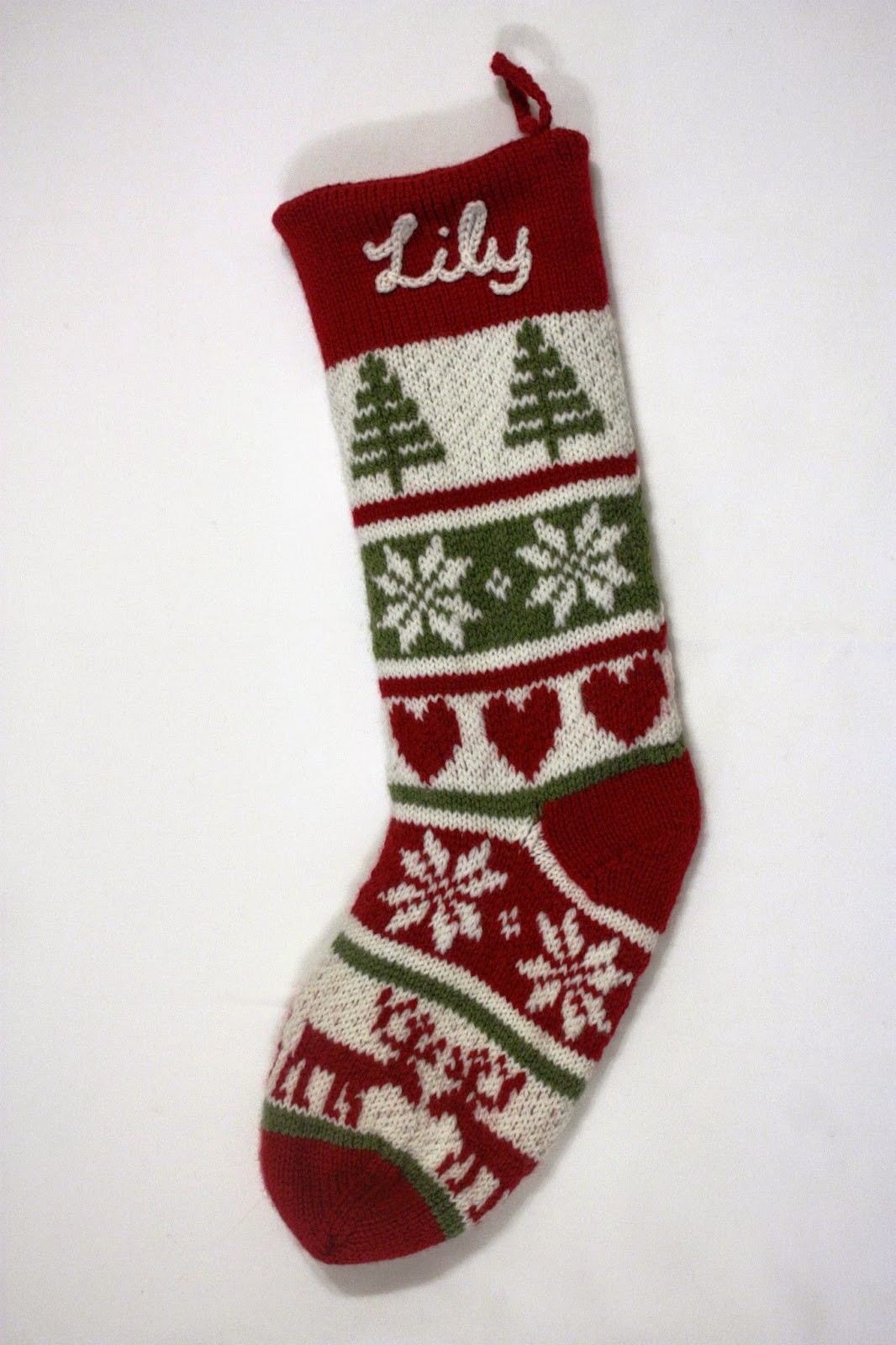 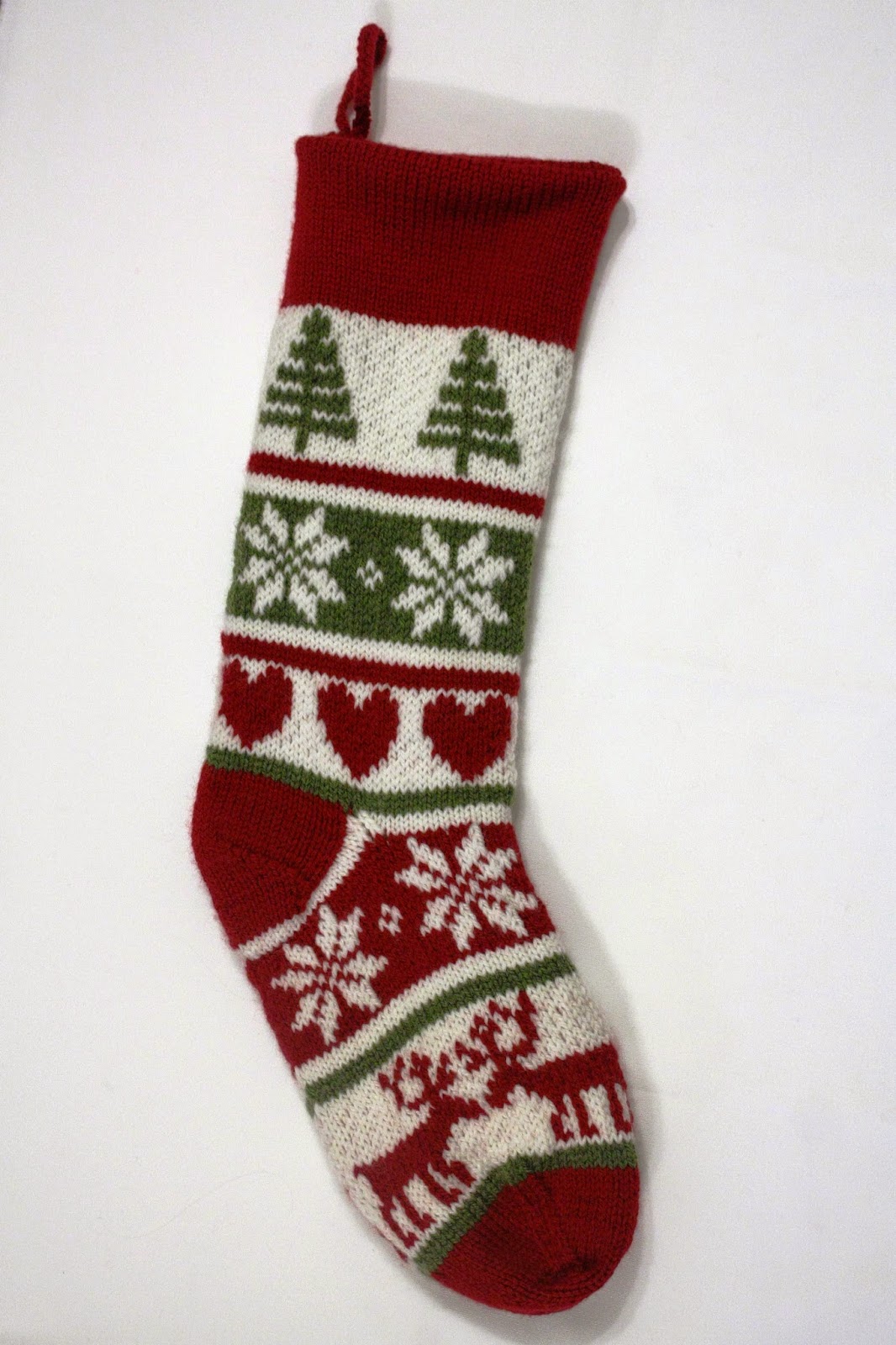 I really like this stocking, and had a lovely message from my friend saying that she loved it. Now I just need to decide what stocking to knit for my daughter. I probably ought to get a move on...
Posted by Vikki at 12:00