I enjoyed knitting my Farm to Market Mitts so much that I thought I'd look at casting on a few more pairs of mitts for the knit along part of the Indie Design GAL on Ravelry (full details can be found here; note that you will have to be logged into Ravelry for the link to work). I chose Antiquity by Alicia Plummer purely on the recommendation from Corley when I interviewed her a few weeks ago. They're a really delicate looking set of mitts, with a Broderie Anglaise stitch pattern worked across the body of the mitt and the thumbs knitted straight. I think they'd make perfect reading mitts for those days when your hands are just a bit chilly when you're sat still reading a book and thus can't hide your hands under a blanket.

I decided to use cream Debbie Bliss Rialto DK, left over from another project (in fact unravelled from an ill-fated hat). The pattern recommends casting on using the alternate cable cast on, which I hadn't used before, so had to Google. The cast on required a bit of thought, but looked much better than the standard cable cast on (my default) when combined with the ribbing, so I'll definitely use it again. There are also variants of the cast on for different types of ribbing (e.g. 2x2 and 2x1), so I might look into those too when I get a chance.

The mitts come in three sizes: 7, 8 and 9 inch hand circumference, and I deliberated hard about which size to cast on. These mitts are going to be a gift for a friend from university, and overall she is much smaller than me, but I do have surprisingly narrow hands, so I ummed and ahhed over which size to knit. I started off by casting on the smallest size, having a moment of doubt, pulling them out, casting on the medium size, deciding they would be too big, then starting again with the smallest size.

The stitch pattern was pretty straightforward - it did take a couple of attempts to get my head round the elongated stitches, but after the first couple they were easy, and the stitch pattern was easy to memorise. The thumb gusset increases are yarn overs; I knitted through the back of the them to close them a bit. I didn't pay enough attention to the thumb gusset increase instructions on the first mitt though and managed to work the increases too fast, so had to pull back about an inch, then pay more attention the second time round!

Knitting with cream yarn is a bit fraught for me. I was happily drinking a hot chocolate whilst finishing off the first mitt, and had a minor 'what am I doing??!!' panic, but the mitt made it unscathed!

Overall these mitts were a very satisfying knit, complex enough to be interesting, simple enough to not require too much thought. And I really like how they look now they're done (and blocked, before blocking they were a little lumpy in places; for some reason I wasn't great at stopping ladders at my needle changeovers in this stitch pattern). I'd definitely recommend this pattern. 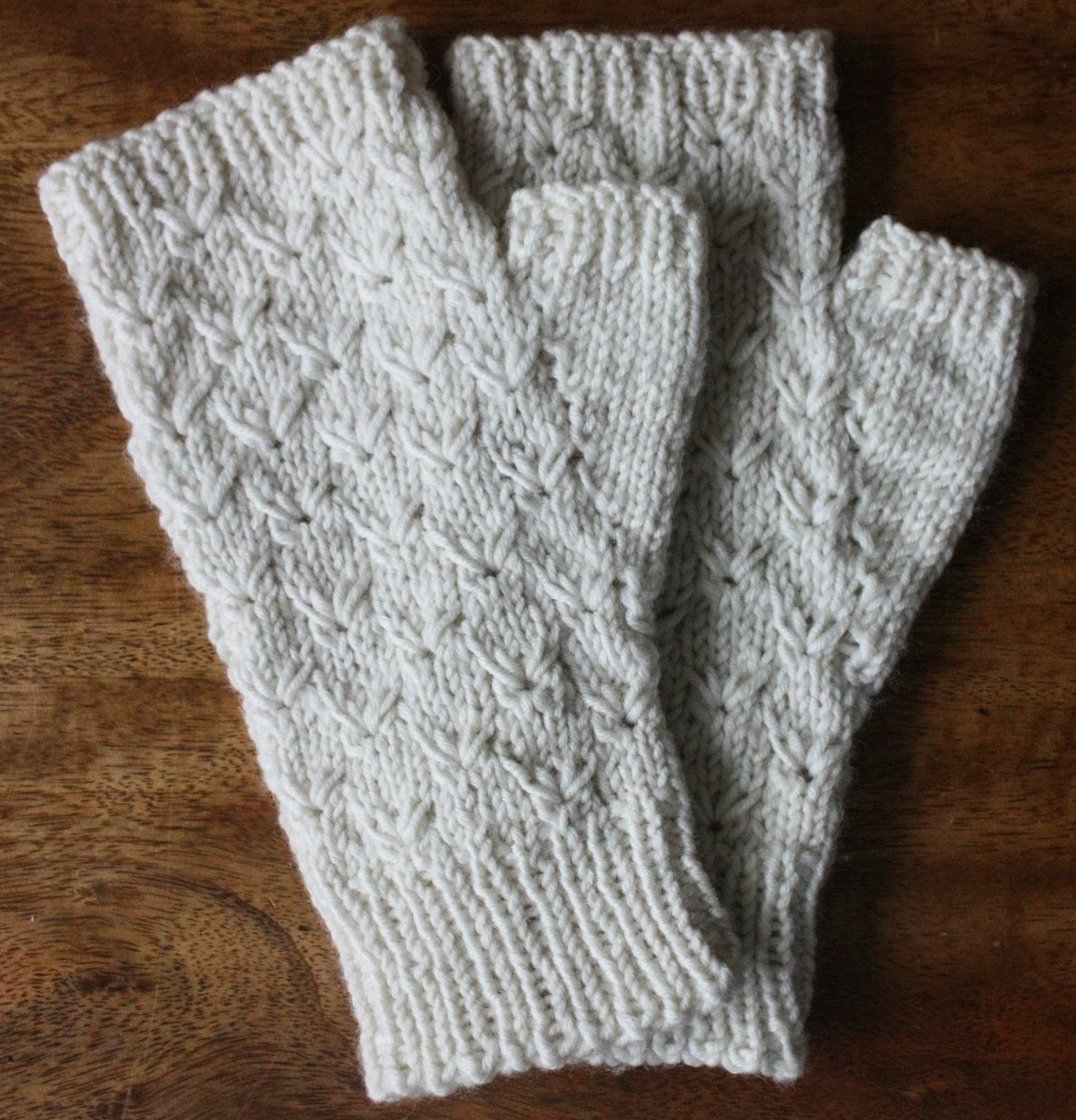