Phew, the past couple of weeks have been busy and I am a little behind on baking (yes, I know I skipped Week 8, this will be rectified over half term next week), but I managed to bake something for patisserie week (and on a Wednesday!): choux buns.

I don't tend to make patisserie as it requires several stages of chilling, which doesn't work in a house where the inhabitants think food should be eaten the second it leaves the oven, but I decided that I would give it a go this week. I browsed a couple of my favourite baking books (Gorgeous Cakes and Great British Bake Off: Big Book of Baking), before deciding that I would make eclairs. I have made choux pastry before, once, over 20 years ago (about the same time I made puff pastry at school), so had pretty much no idea what to do, apart from what I had picked up from watching various baking programmes. Choux pastry is apparently not all that hard, but does require constant attention - lots of carefully melting, vigorous beating (very vigorous - it looks awful when you first start to beat the eggs in!), two oven temperatures, and piercing the pastry near the end of the cooking time to release the steam - so I was pretty surprised that it turned out ok, and the buns didn't collapse when I took them out of the oven (they became buns rather the eclairs as it took longer than I'd planned to make the dough, so dolloping the mixture on the tray was the only option I had time for)! 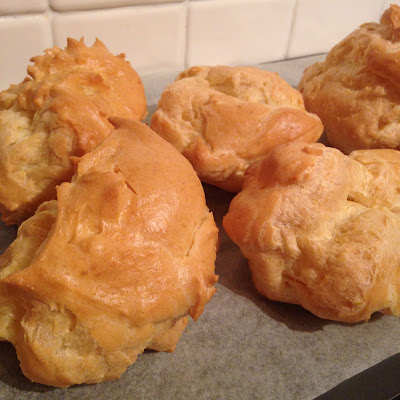 The buns are pretty much hollow, so it didn't take too long for them to fully cool, ready to be filled with cream and coated with chocolate, both of which were easy compared to making the dough, and the buns were ready in time for pudding on Wednesday evening, just before Bake Off. The buns went down well with my family, with everyone enjoying them, but they did feel pretty decadent for an everyday bake, so if I make these again they'll be baked for a special occasion. 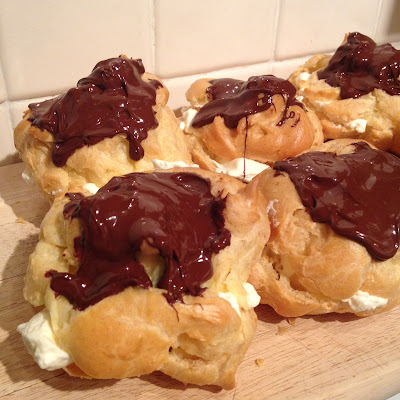 Next week is the final of Bake Off, and I'm really looking forward to it. I've enjoyed this series more than the past couple; the bakes have been simpler and I've managed to pick up the odd tip along the way. I really want Andrew to win, and I think it'll be either him or Candice. I'm less excited about the programme moving to Channel 4 next year, and this might be the final series that I watch as I think it's Mary, Mel and Sue that make the programme, and whatever happens it's not going to be the same. There might be some amazing combination of presenters that I haven't thought up that would work as well or better, but I can't think of any, so I'm keeping my fingers crossed.
Posted by Vikki at 11:02