You may have noticed something slightly surprising in my December round-up: a ruffle skirt. I am not a fan of novelty yarns; I have knitted with bouclé (I had know idea how many stitches I had at any point, and when I needed to rip it out to start again I had to abandon it and just start again as the yarn had essentially glued itself together irreparably), snowflake yarn (which feels weirdly plastic-y when you're working with it, and it really doesn't sew up well); and have made my mum knit me all sort of things made of multi-coloured slightly bobbly yarns, and super fluffy mohair-like yarns (I think I was forgiven for that though as I wore both insanely fluffy mohair-esque cardigans forever!). And to be honest I haven't found any novelty yarn which has given a pleasurable working experience, so what on Earth made me want to work with ruffle yarn?

Ruffle yarn totally passed me by at the height of its popularity. I wasn't keen on the scarves it made, and I prefer my projects to take longer than one sitting (it gets expensive otherwise). But towards the end of the trend I did see a ruffle yarn pattern that took my fancy: a ruffle-y ballerina skirt. To me this was the perfect use for this yarn.The yarn comes in lots of little girl appropriate colours, and what girl doesn't love to dress up as a ballet dancer? At the time I didn't have a daughter, so I considered making a skirt for a friend's daughter, but the ruffle yarn was still of the order of £10 a ball, which seemed a bit steep for something that would only ever be worn as a novelty item (especially as the pattern entry was a bit vague about the amount of ruffle yarn needed, so I was going to have to buy two balls just to make sure I had enough), so the idea got shelved for a while.

Fast forward a few years, when, just before Christmas I had an email from Deramores advertising a clearance sale, including a ruffle yarn (James C. Brett's Can Can) at only £1.49 a ball. So for some reason I remembered the ruffle ballerina skirt, and, now having a daughter as an excuse to make a skirt, I ordered four balls [yes, I did need four (600 g total), two each in two different colours - dark red, and shades of purple - you can see how my stash has become so large!].

As it was close to Christmas I decided that I would make the first skirt for my friend's daughter rather than for mine. The design is crocheted, so I'd thrown my crochet hook holder in my yarn bag before we went away, then tried to get gauge, which I couldn't, even with the largest hook I had with me. So I improvised. I calculated that if I knitted the 1-2 years size it would come out at the 6-12 month size, I then followed the length instructions for the 6-12 month size, which sounds complicated, but really isn't. The instructions were really straightforward (except when I forgot that the pattern is in US terms, so had to redo the waistband as I'd gone for UK trebles, which didn't leave anywhere for the ribbon to go), but I will confess that I struggled with the ruffle yarn. Essentially the ruffle yarn is made up of a net, and to crochet it you have to open out the net, then crochet only the edge. This requires quite a lot of concentration!

I love how it turned out. The ruffles are lovely and ruffle-y, and they're nice and dense in their layers (possibly more dense than the pattern intended owing to my tighter than written tension). My family also had great fun trying it on - my daughter in the conventional manner, the rest of my family as a hat... The recipient is delighted with it, which is always good. 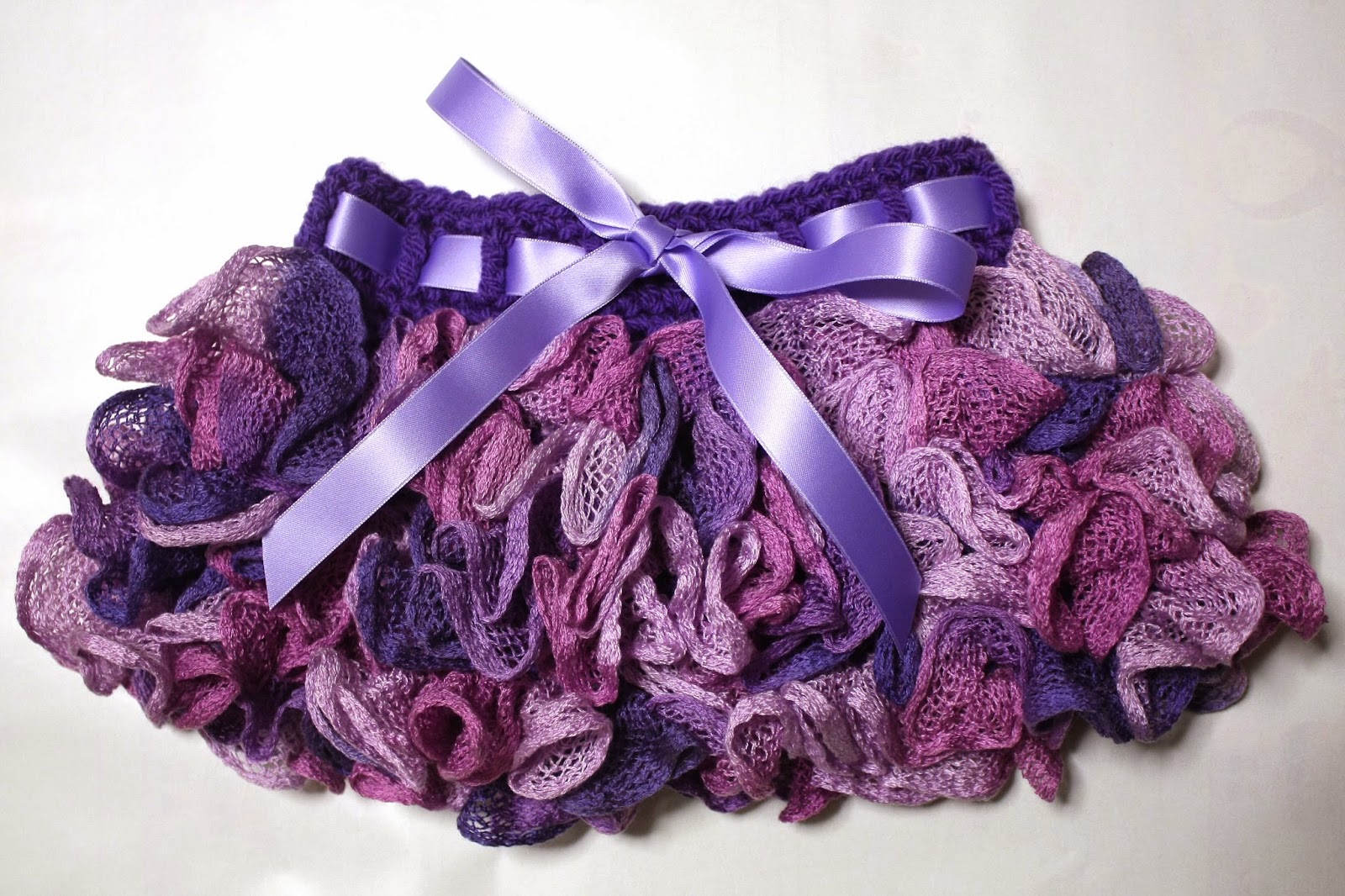 And will I be rushing to make a second? Well, I have plenty of yarn left - the skirt only took 60 g of ruffle yarn - so there's plenty of opportunity, but I think I will wait until I've forgotten how annoying the yarn was to work with! Anyone want some spare ruffle yarn?
Posted by Vikki at 09:55