Last weekend I finally got round to doing something I've been meaning to do for a long time: dye my own yarn. I've spent the past few weeks reading lots of blog posts about dyeing your own yarn using Kool Aid (the option that requires least start up cost - it's food safe, so you can use regular pots and pans, and it's safe for kids too, which makes life easier), and a couple of weeks ago finally bit the bullet and ordered enough sachets of Kool Aid to dye the three skeins of Araucania Ranco I bought just before Lent. 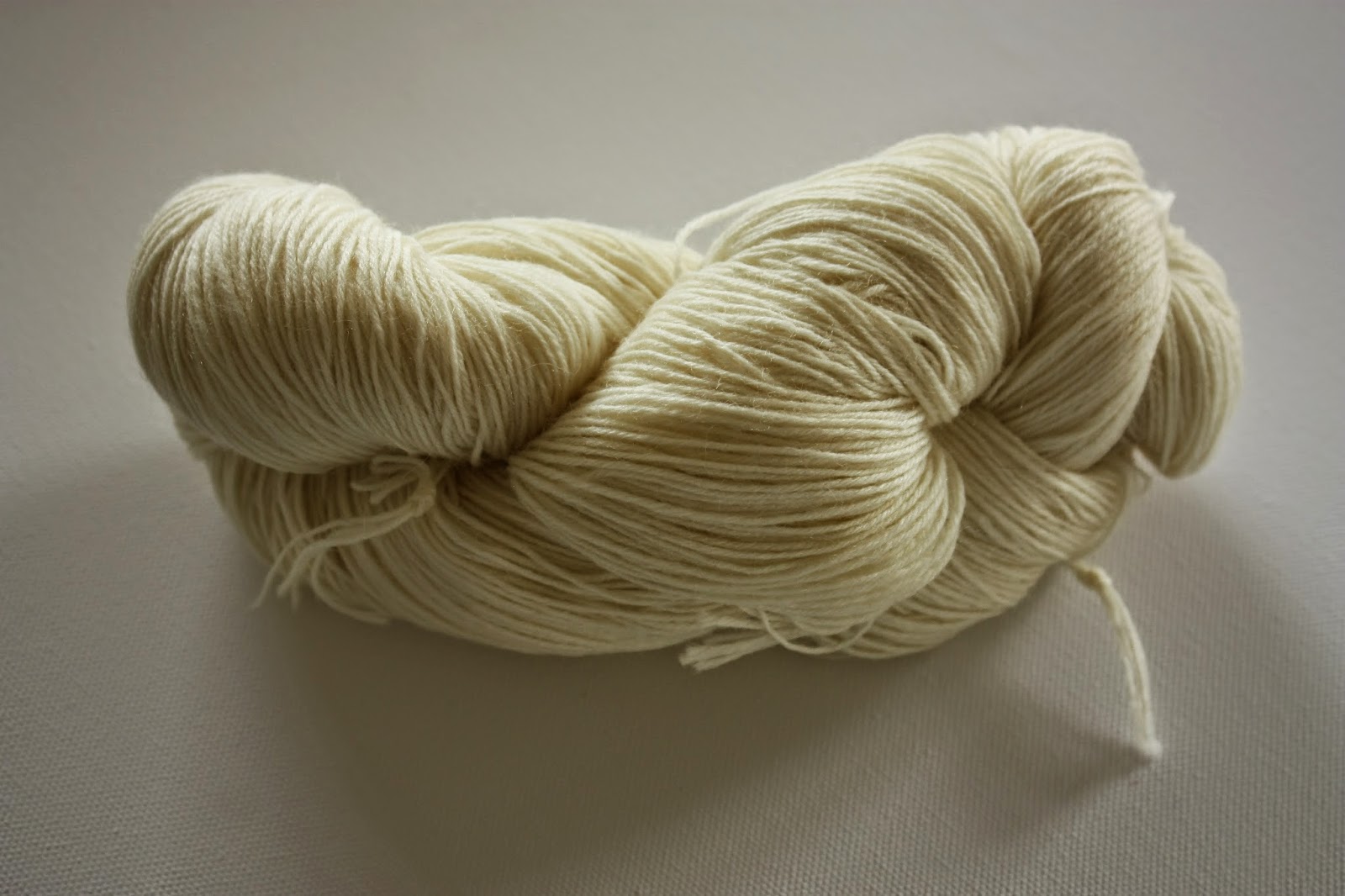 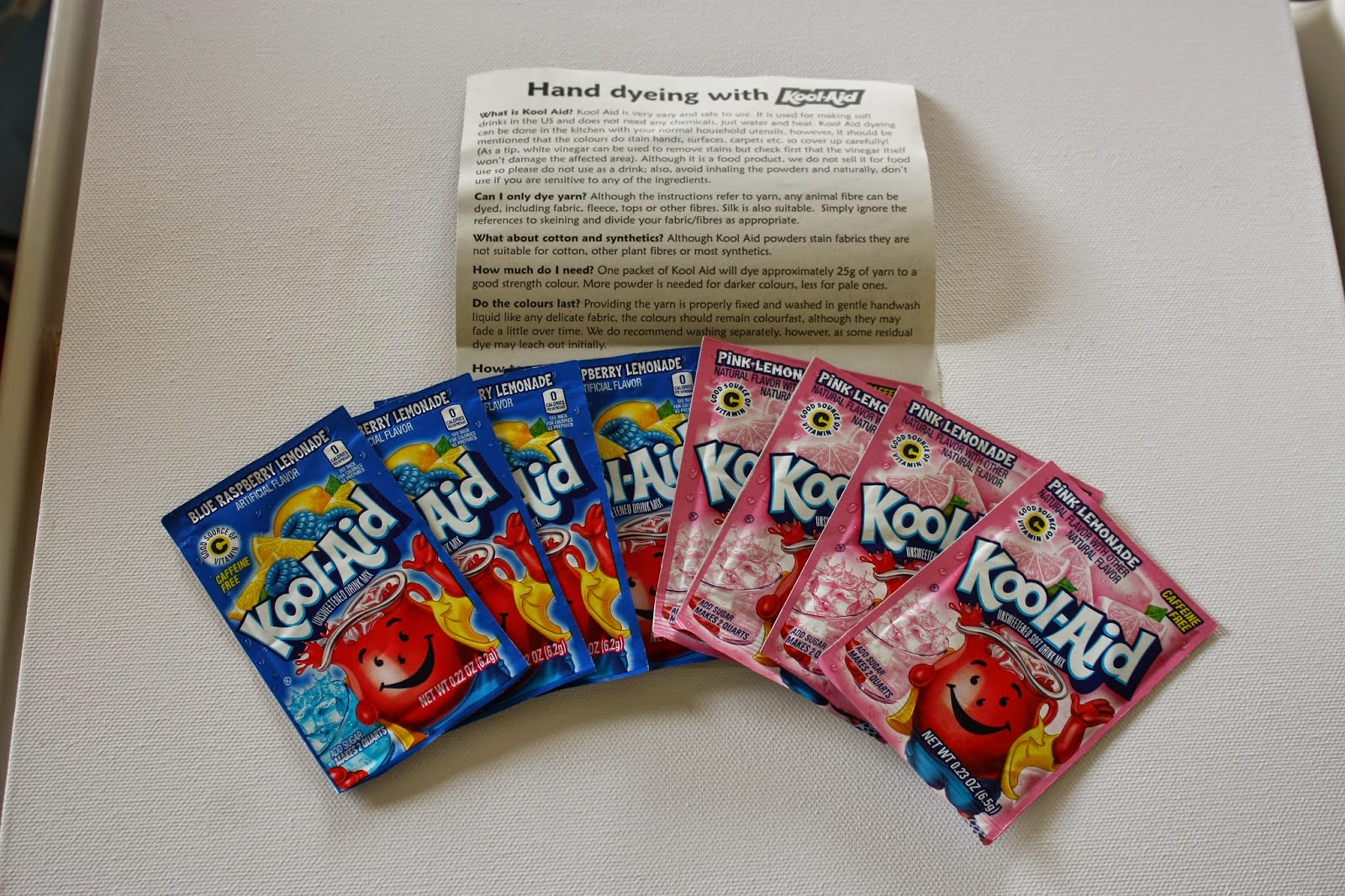 Rather than get excited and dye all three skeins in one go I decided to dye just one skein, in blue and pink. I was aiming to follow this tutorial on dyeing gradient yarns, dyeing one end of the skein pink and one end blue, with some lovely purple in the middle.

I started by winding my yarn into two 50 g balls - I'm planning on knitting socks with it, and I wanted two socks the same, rather than a gradient spread over two socks - then soaked my yarn in cold water while I dissolved four sachets of pink Kool Aid (Pink Lemonade) in a really big pan. Once the balls were wet all the way through I transferred them to the pan and simmered them gently for half an hour, taking care not to let the water boil. I moved the balls of yarn around occasionally, making sure I was gentle with them so they didn't unravel or felt. After 30 minutes there was still lots of dye left in the pan, so I continued to simmer the yarn for another 30 minutes, which is much longer than I was expecting the process to take, part of me thought it might be pretty much instant (I have no idea why!). 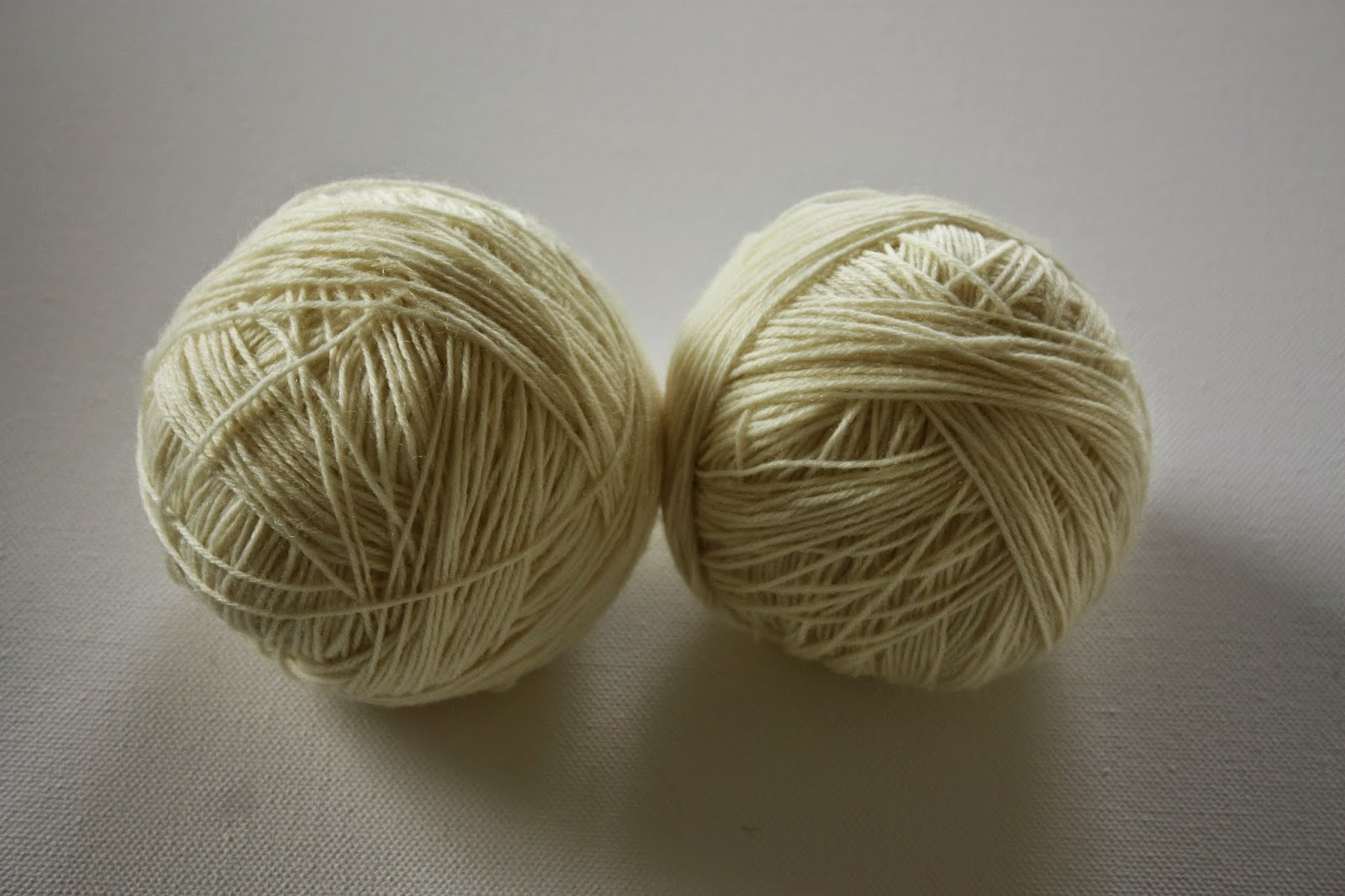 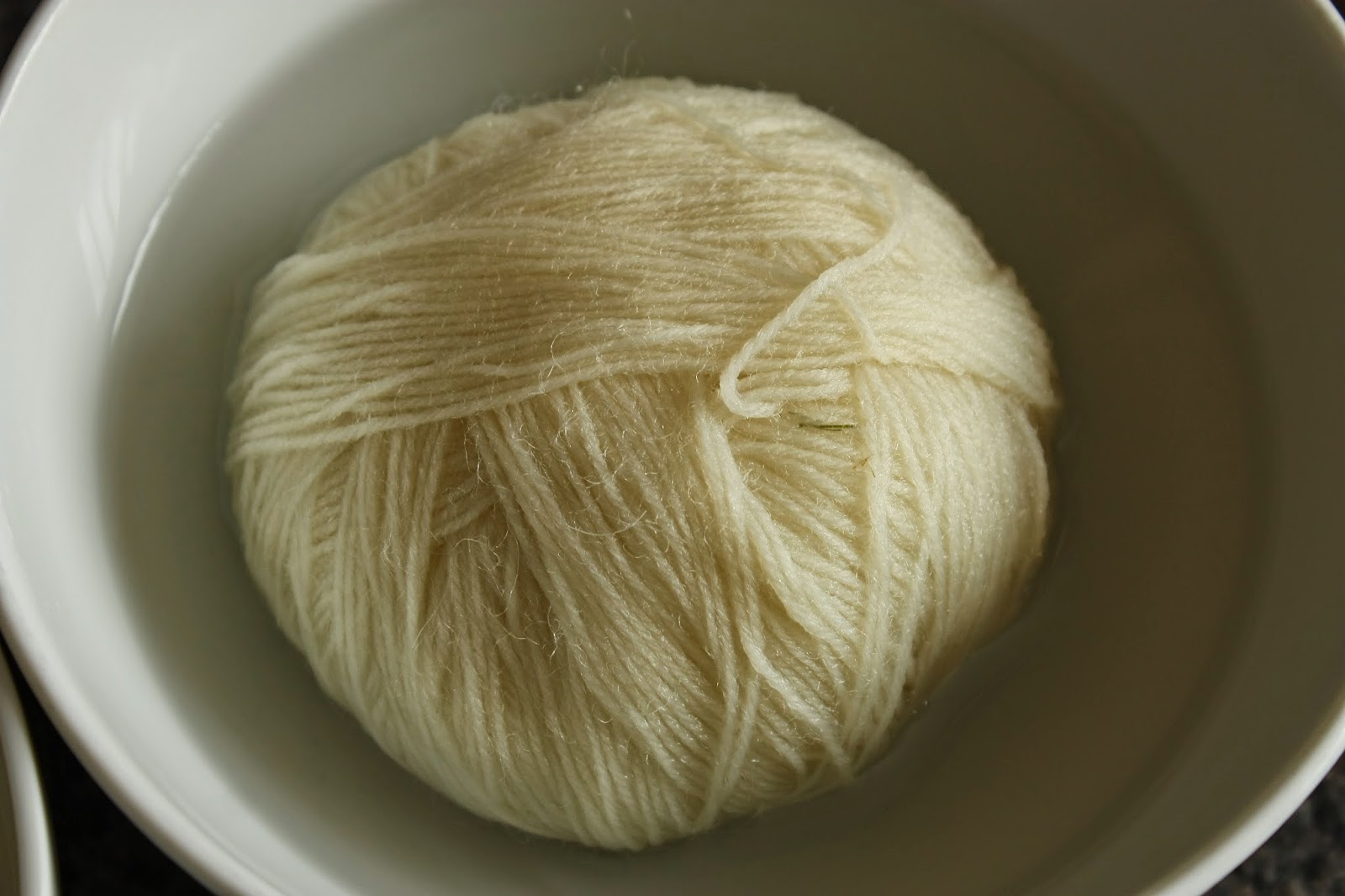 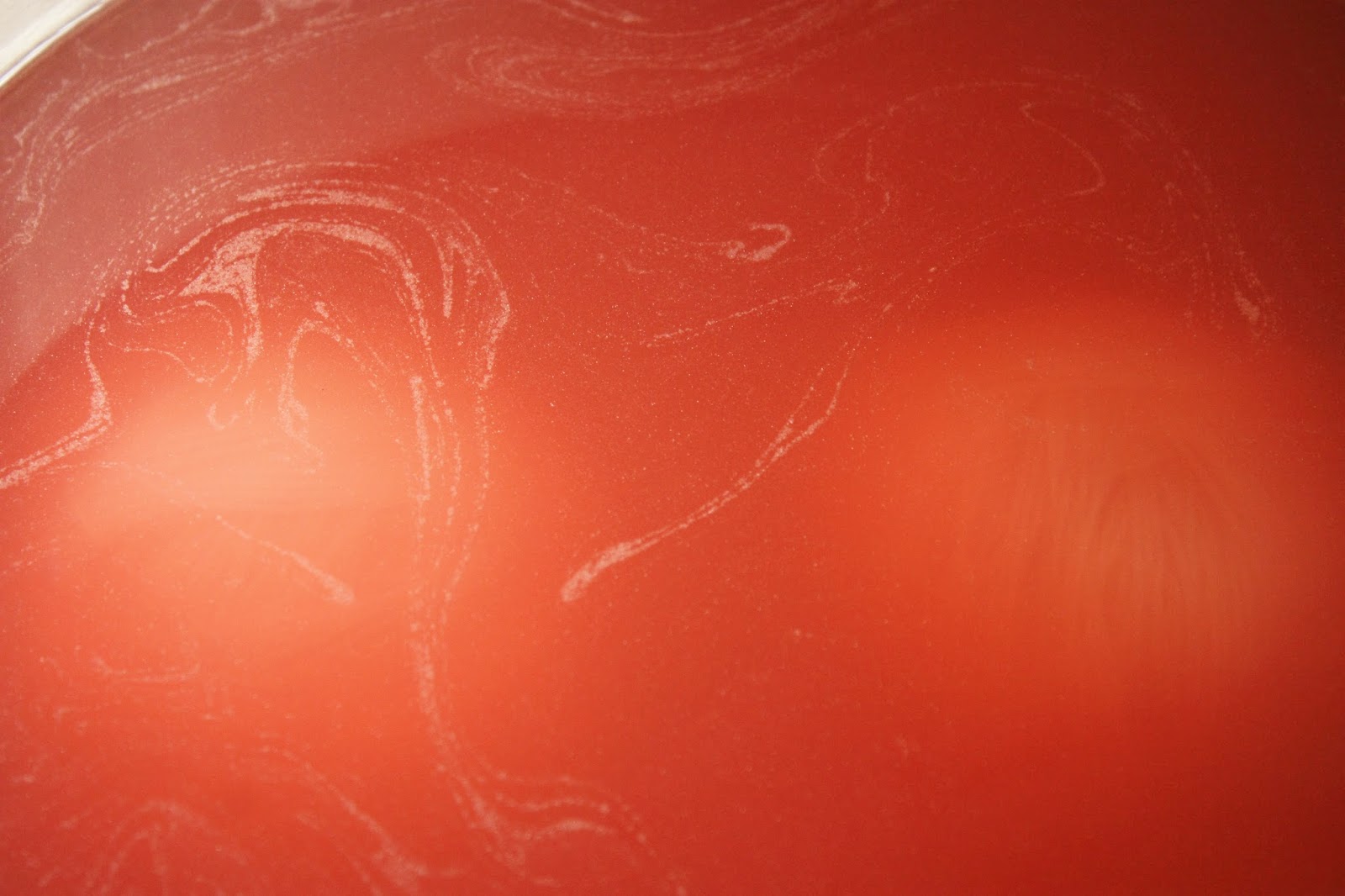 Once the yarn had simmered for an hour, I removed it from the pan, allowed it to cool for a bit, then rinsed it. And no dye came off! My yarn was fast. 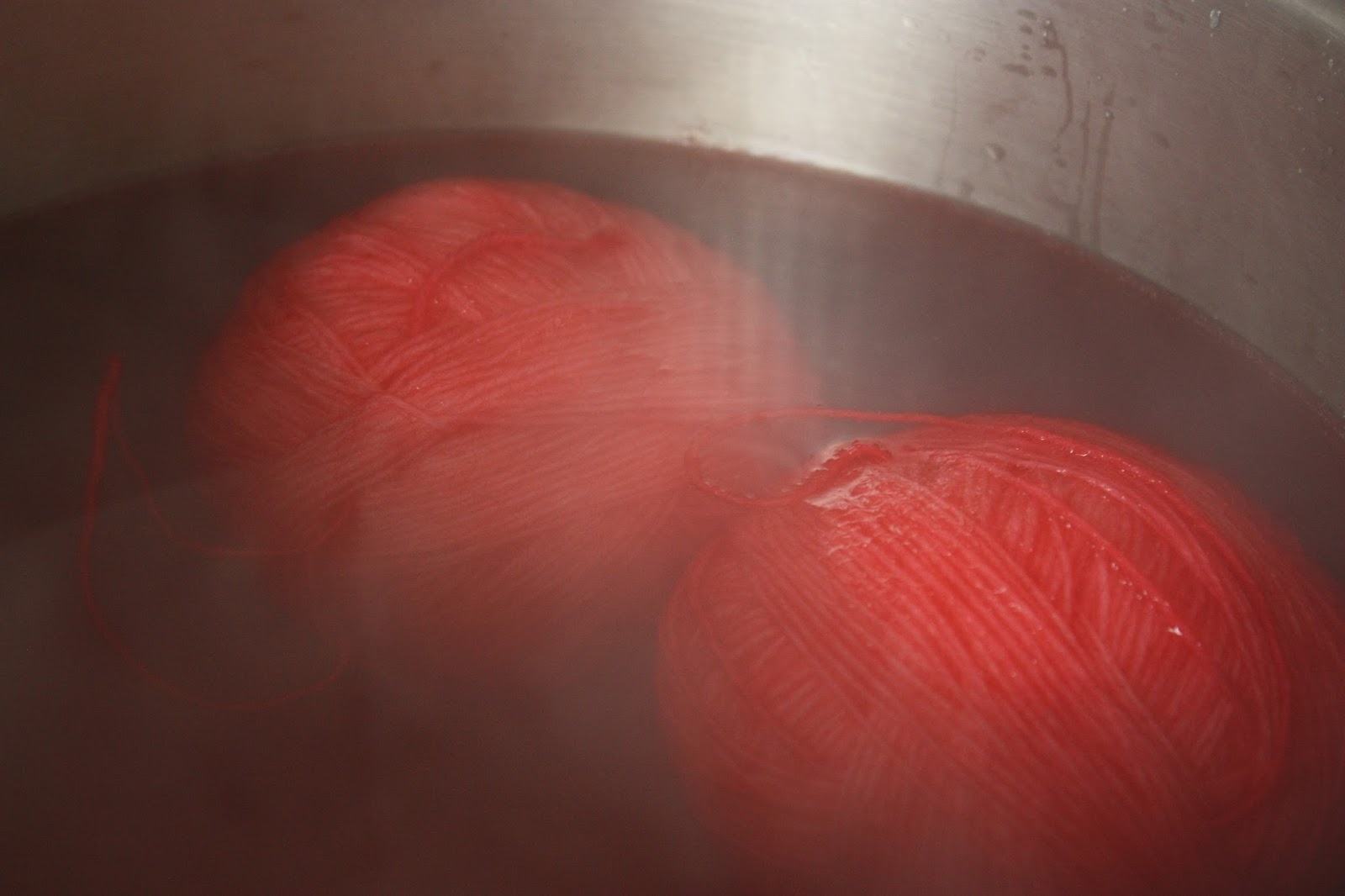 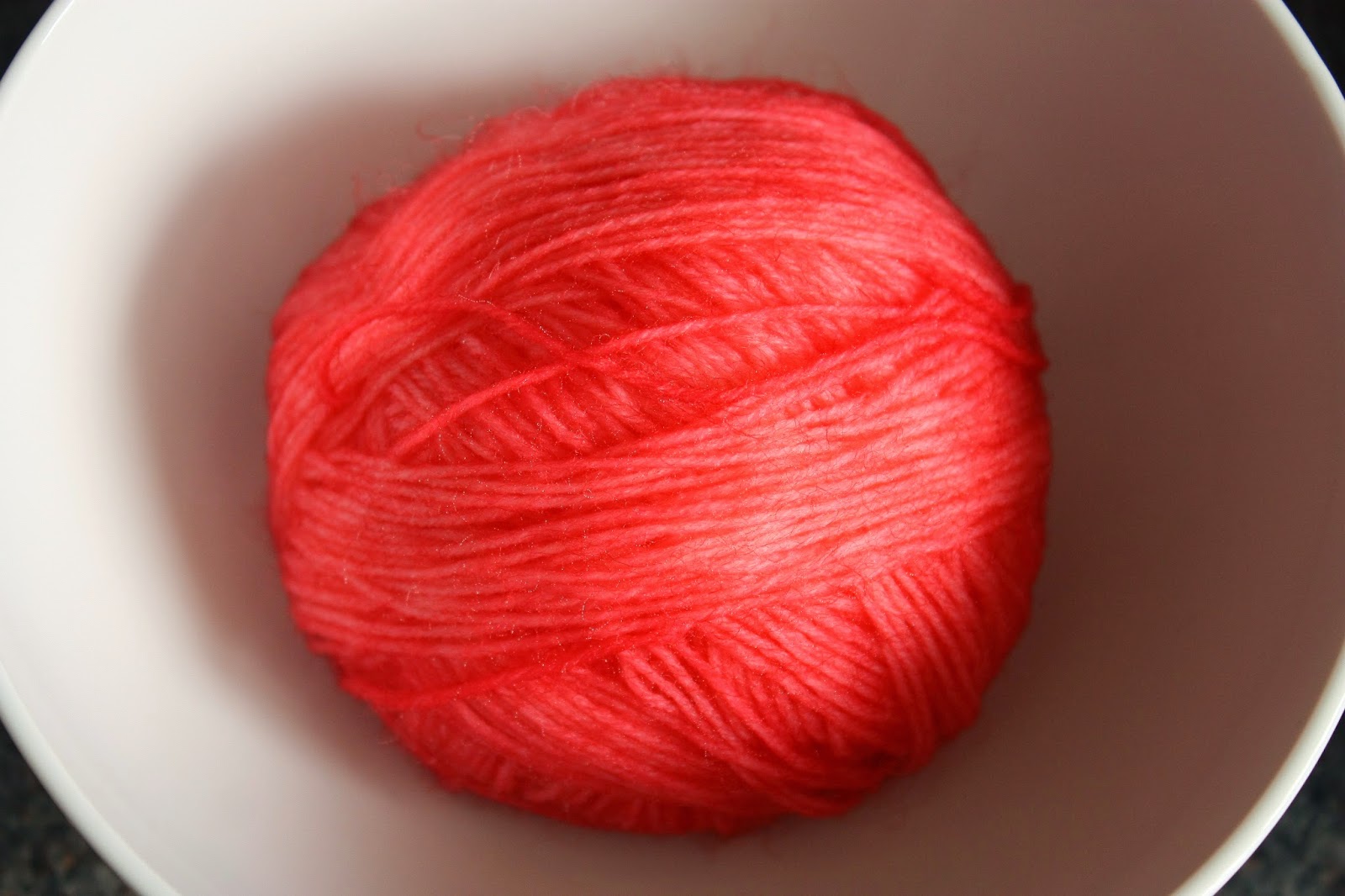 I wound the rinsed yarn round a box lid, which was easier said than done - I spent rather a lot of time untangling knots. At this stage the yarn was a little flamingo-like for my liking - the dye hadn't penetrated as far as I wanted, so rather than rewind the yarn in reverse as I had planned, I decided to make it into a skein and overdye it in blue instead and see what happened. 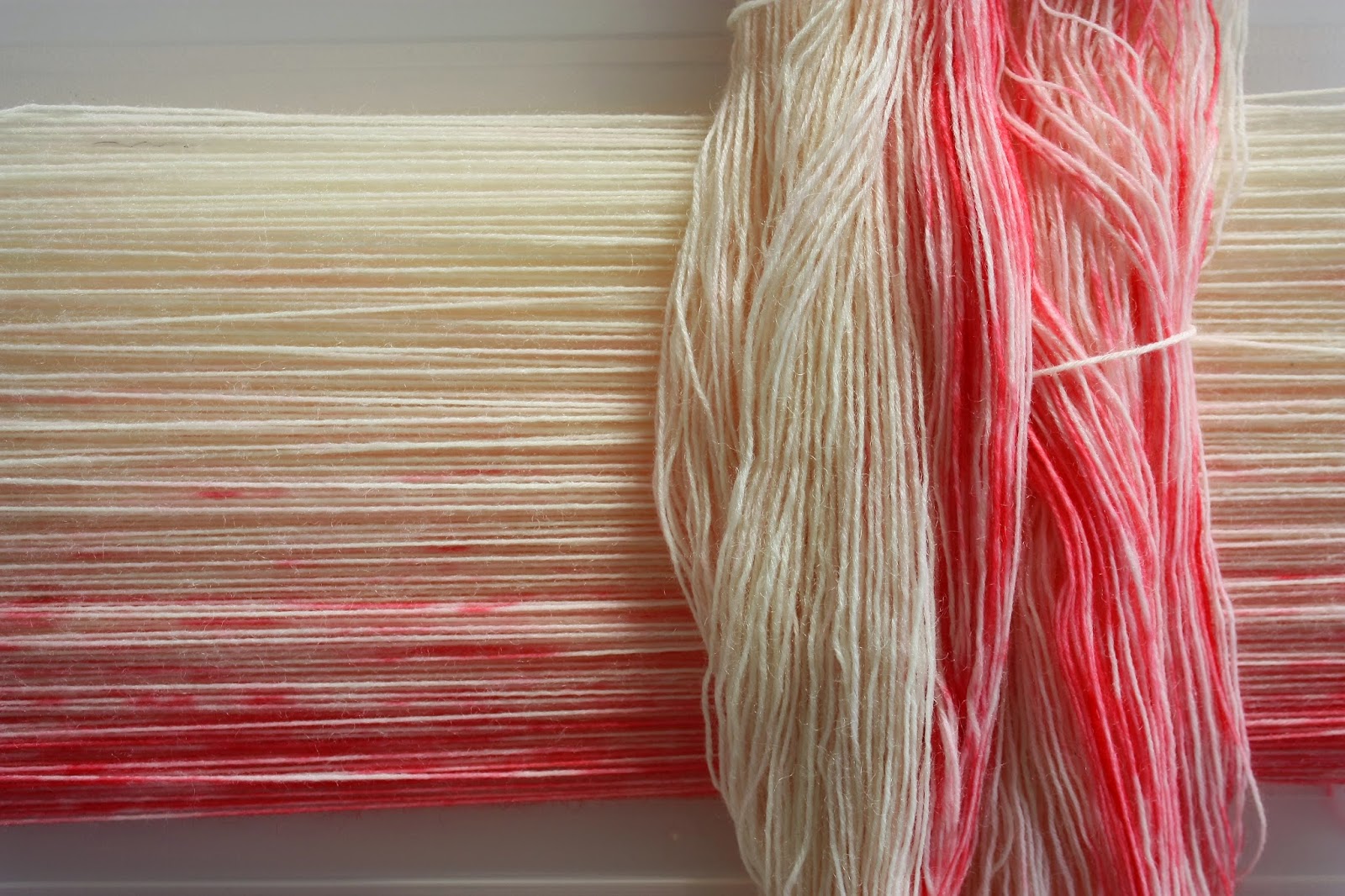 I mixed four sachets of blue Kool Aid (Blue Raspberry Lemonade, which smelt revolting!) into the freshly washed pan and threw the yarn in. I simmered the mixture for 30 minutes, deliberately not stirring it as I wanted a variegated effect and waited to see what would happen. 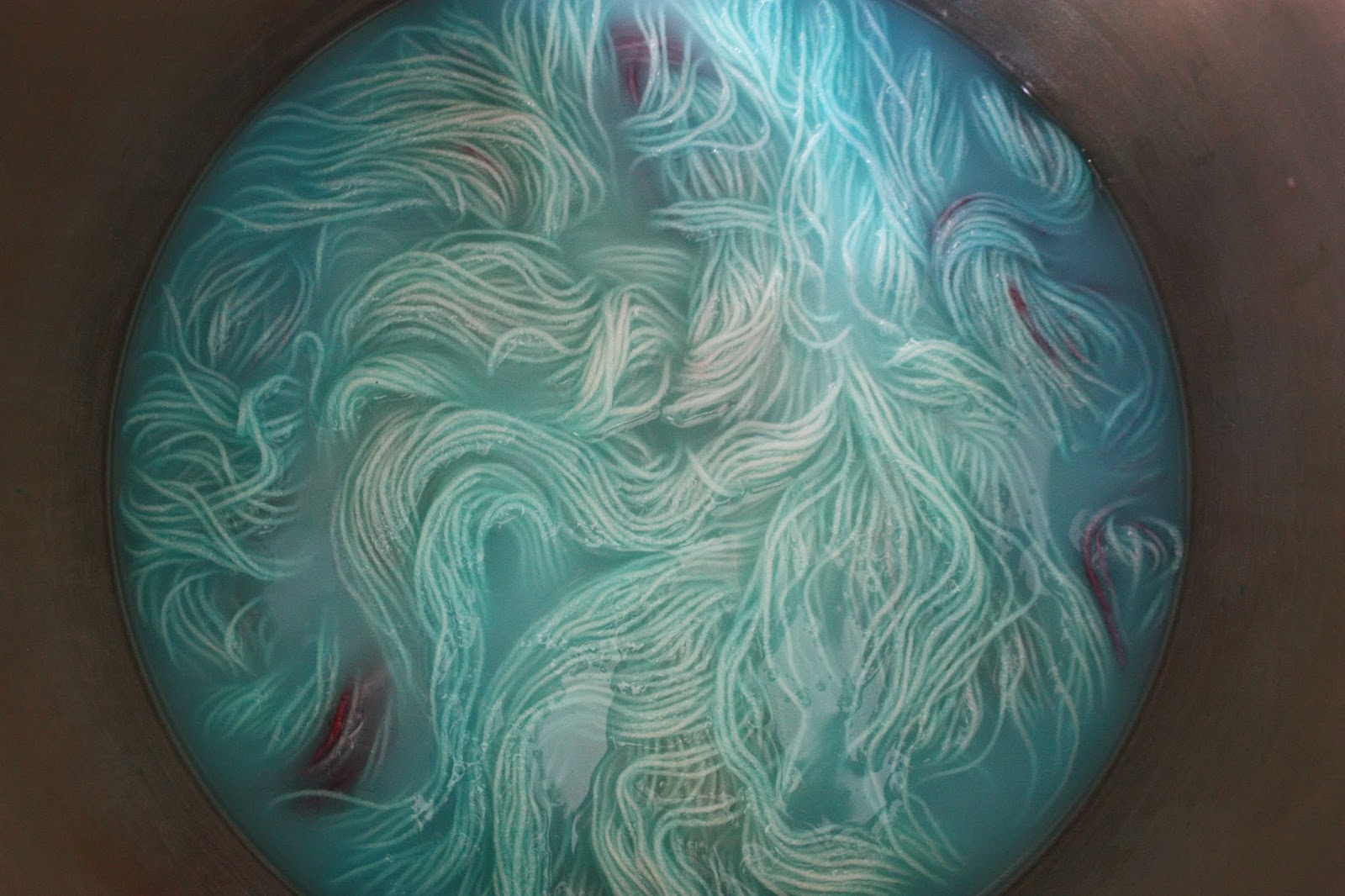 At the end of the 30 minutes all the dye had been sucked up by the yarn, so I fished the yarn out and rinsed it in cold water. I carefully squeezed the excess water out and lay the yarn out to dry. And I love it. I spent most of Sunday evening staring at it and appreciating all its little nuances. I can't wait to get it knitted up. Or to dye some more yarn! 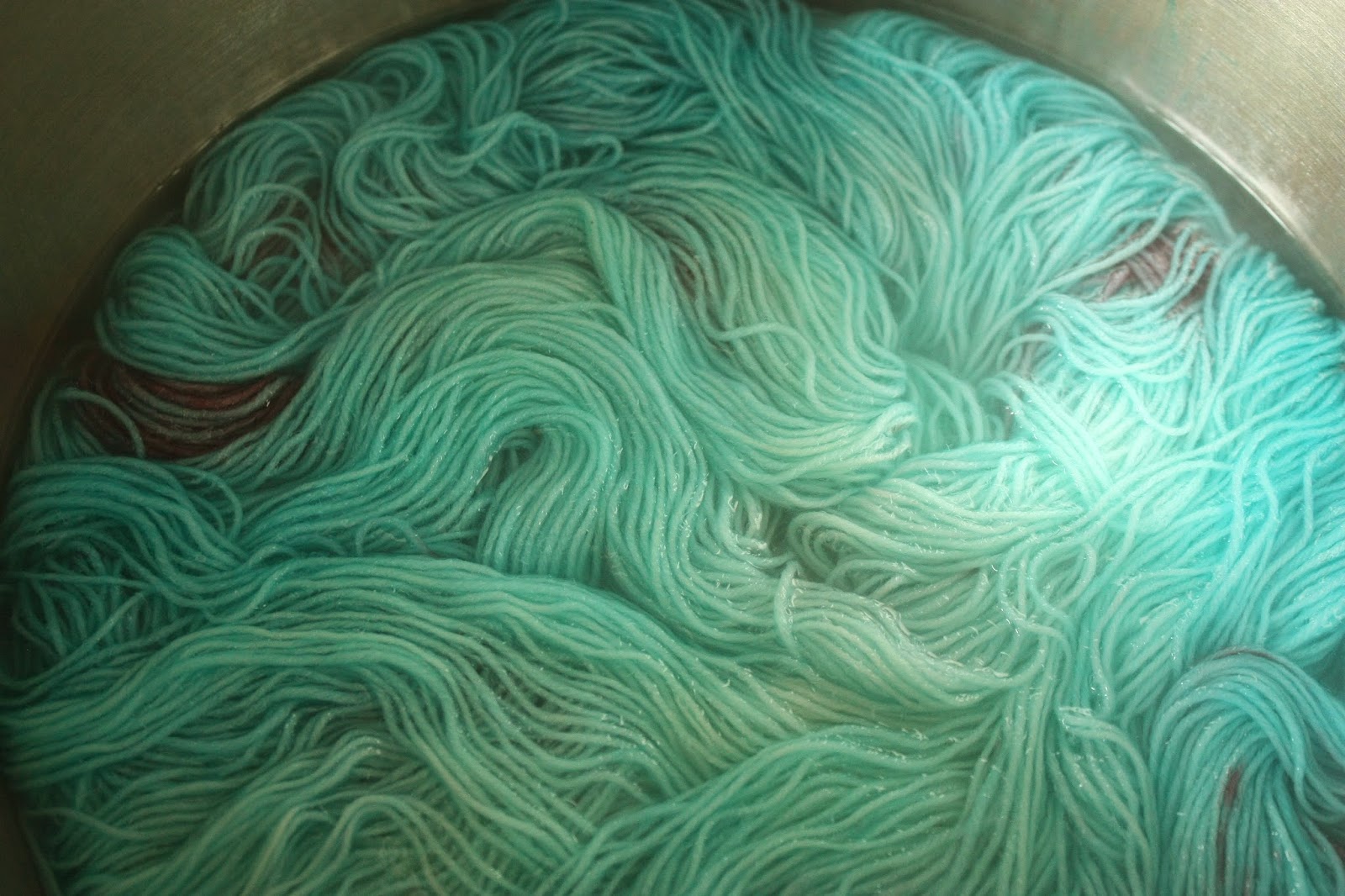 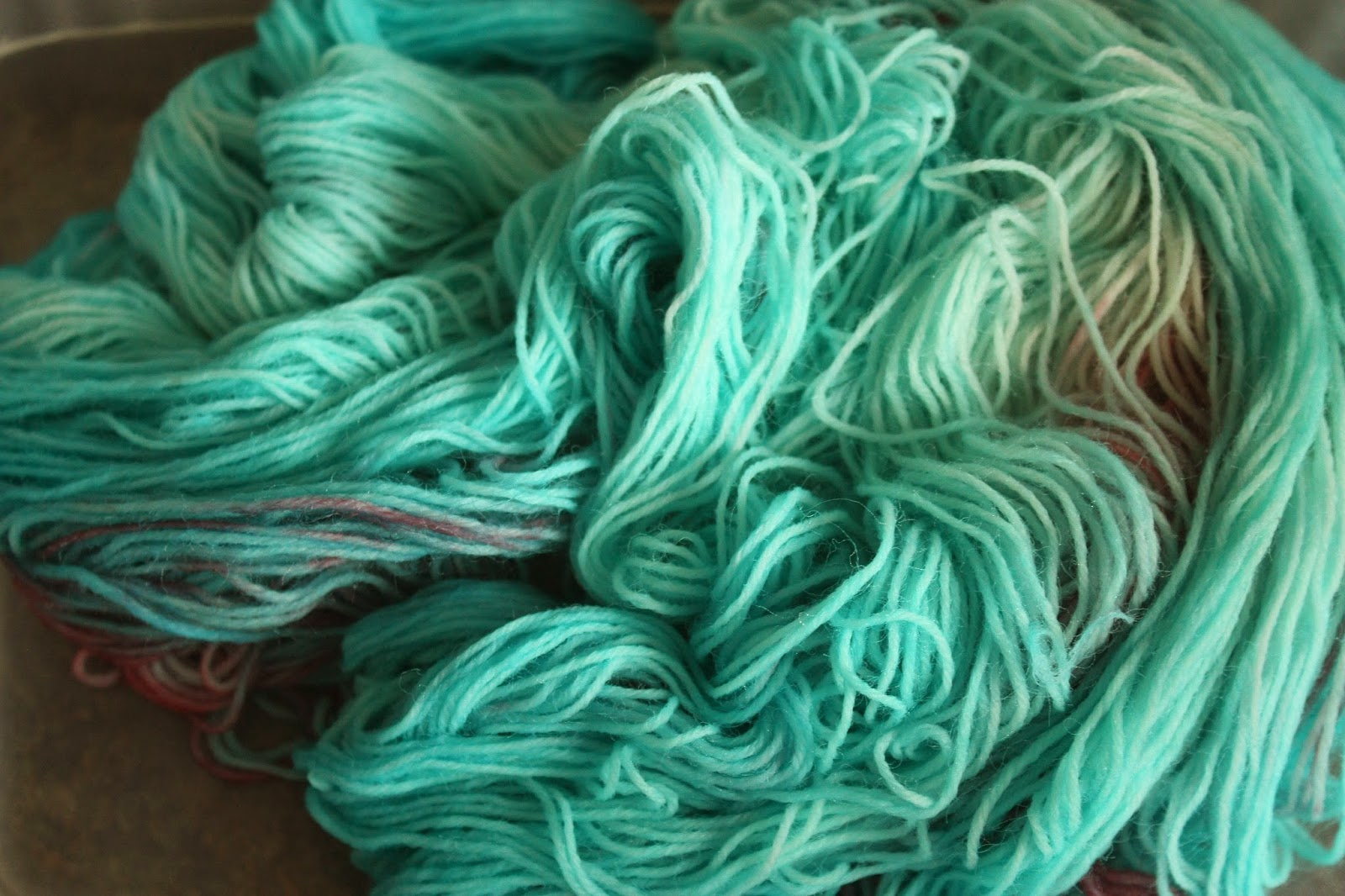