The week after the Christmas holidays is always a bit strange; after a fortnight or more of running about and seeing people and trying frantically to get things done, this week can often feel a bit flat. As I'm on maternity leave I didn't have the back to work issue, but I did have to entertain both children by myself all week for the first time in several. So our solution was to do quite a lot of baking...

On the twelfth day of Christmas (Monday) I finally got round to making the gingerbread house I'd been promising to make all holiday. I'd bought a kit in IKEA some time in November, and the kit had travelled to Somerset with us over Christmas, but somehow we hadn't found time to make it. We'd tried to make it between Christmas and New Year, but were limited by the fact that when I checked the cupboard we were out of eggs and lemons, both essential for making royal icing. I did try and glue the house together with glacé icing, but that really didn't work! And so we postponed. I hadn't made royal icing in a long time; I used to make it with my mum every year to decorate the family Christmas cake, and remembered it being really tricky, but actually it was pretty straightforward: mix 250 g icing sugar with one egg white and 5 ml lemon juice. The icing came out at piping consistency without any extra work, so I just threw it in the piping bag and began 'gluing' the pieces together (I did have to gaffa tape the side of the piping bag though as the one I'd picked out of the packet had a couple of small leaks in the seam, which made it rather tricky to pipe neatly).

Once the house had been constructed we set to work decorating it: giant chocolate buttons for the roof tiles, and dolly mixtures around the base of the house. I added some snow icing to the eaves, which was great fun, although I was much better at doing the icing in one direction than the other! The finished house looked lovely for a couple of hours, then we tucked into it - as we were definitely at the tail end of Christmas there wasn't much point in keeping it decorative. My son delighted in picking the sweets off, but wasn't that keen on the gingerbread bit, turns out he prefers digestive biscuits. The icing did turn the biscuit a little soft, but not in an unpleasant way, more like lebkuchen. 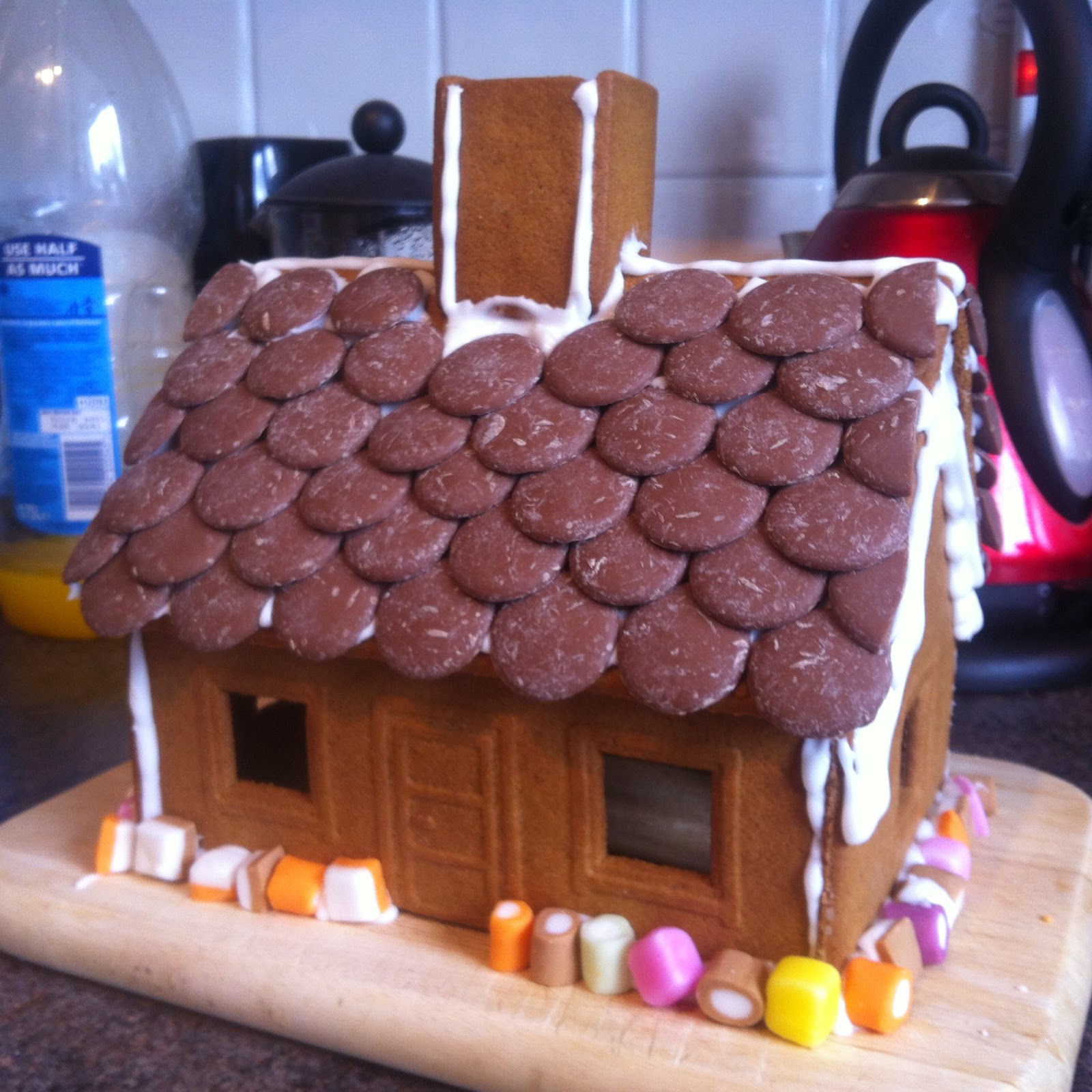 Our second bake of the week (Friday) was chocolate cupcakes. Having done an inventory of my baking equipment over Christmas I realised I have way more cupcake cases than I really need, so decided that I should attempt to use some of them up and definitely not buy any more for the time being (I often get them as birthday and Christmas presents, so rarely need to buy them anyway). We had one of my close but long-distance friends and her partner for lunch on Friday, so it seemed like an excellent opportunity to do some baking, and to use up a few of the excess dolly mixtures I'd purchased for the gingerbread house (I bought three bags, we used less than one!). My son was not on board with this suggestion and insisted we decorate the cupcakes with giant chocolate stars rather than dolly mixtures... The dolly mixtures might have been eaten independent of the cakes.

Baking and icing the cupcakes became a bit of a speed baking mission in the end as I didn't get round to baking the cakes on Thursday evening. So on Friday morning the cakes were baked, and the icing made while they were in the oven. The cakes were iced pretty much as soon as they were out of the oven; this was a bit of an error, and the icing was rather on the melted side by the time the cakes were served; delicious nonetheless. And the blue cake glitter? My son's suggestion; I love cake glitter, but tend to go for holographic white, rather than blue! 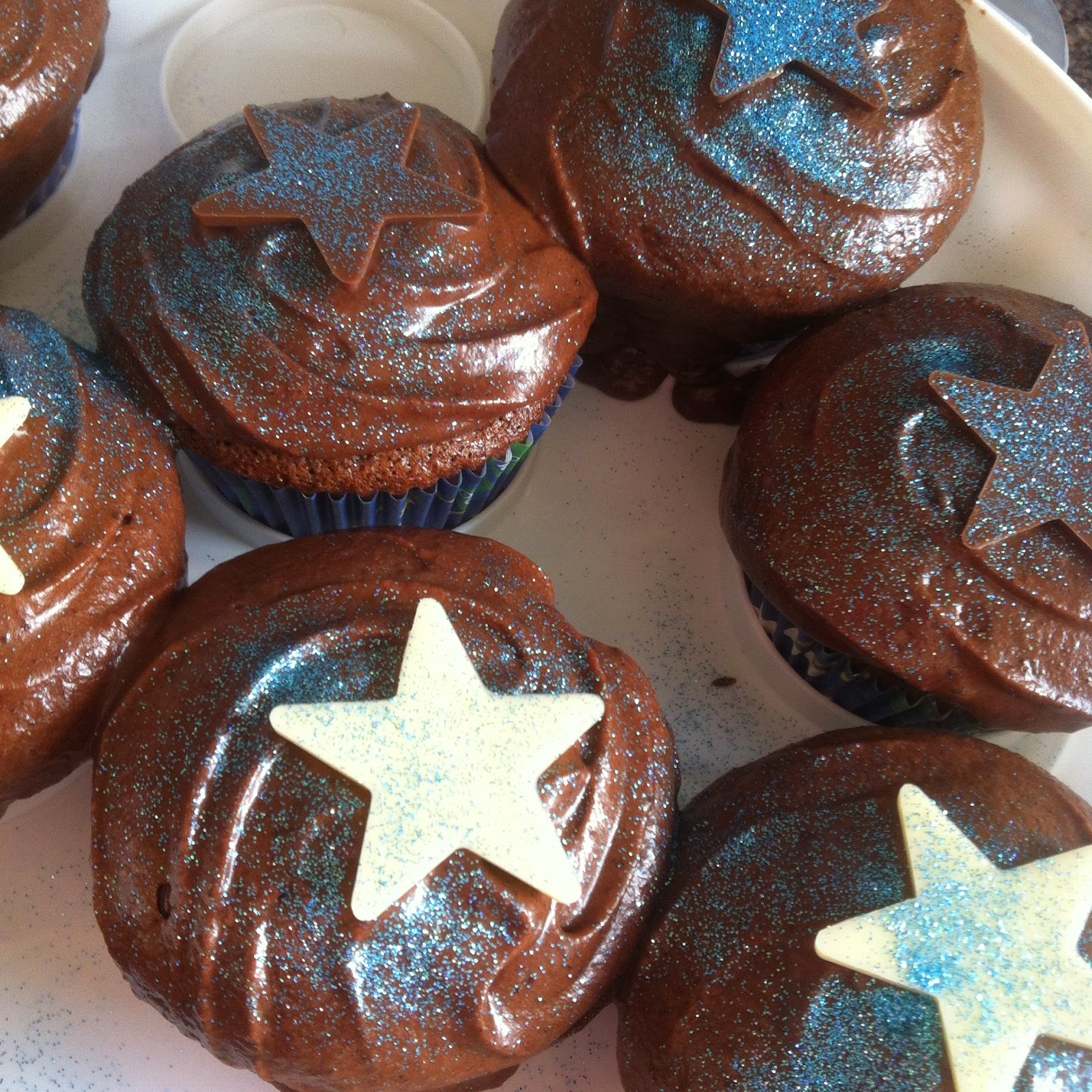 Bake number three for this week was shortbread biscuits. My son had received some space-themed cutters for Christmas and had asked me repeatedly if he could use them. We finally found time on Saturday evening. We made a basic shortbread mixture (3 parts plain flour, 2 parts butter, 1 part caster sugar), and rolled and cut it out before putting it in the oven for about 20 minutes at 190 °C. Simple yet perfect, an excellent Saturday evening activity. 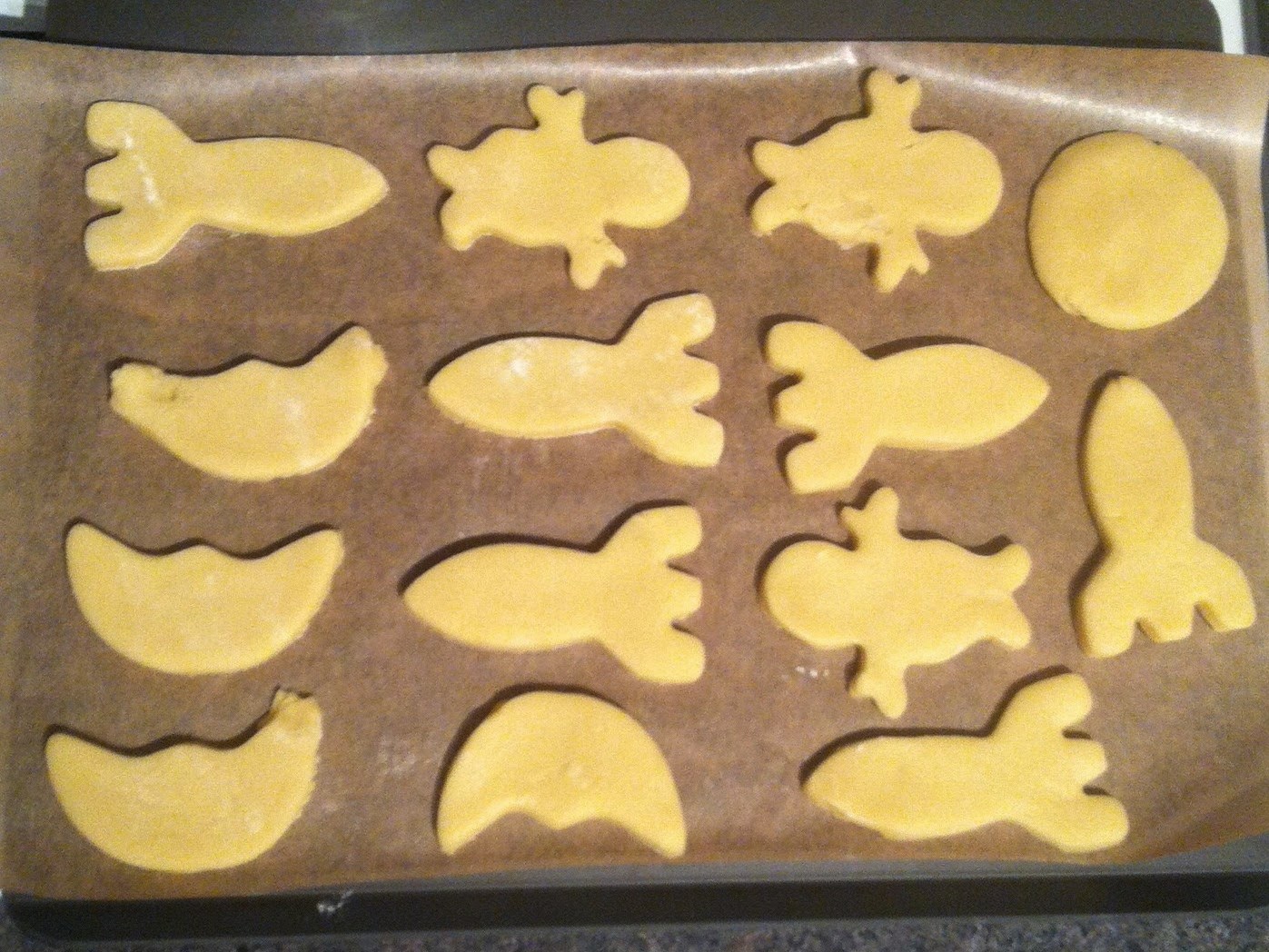 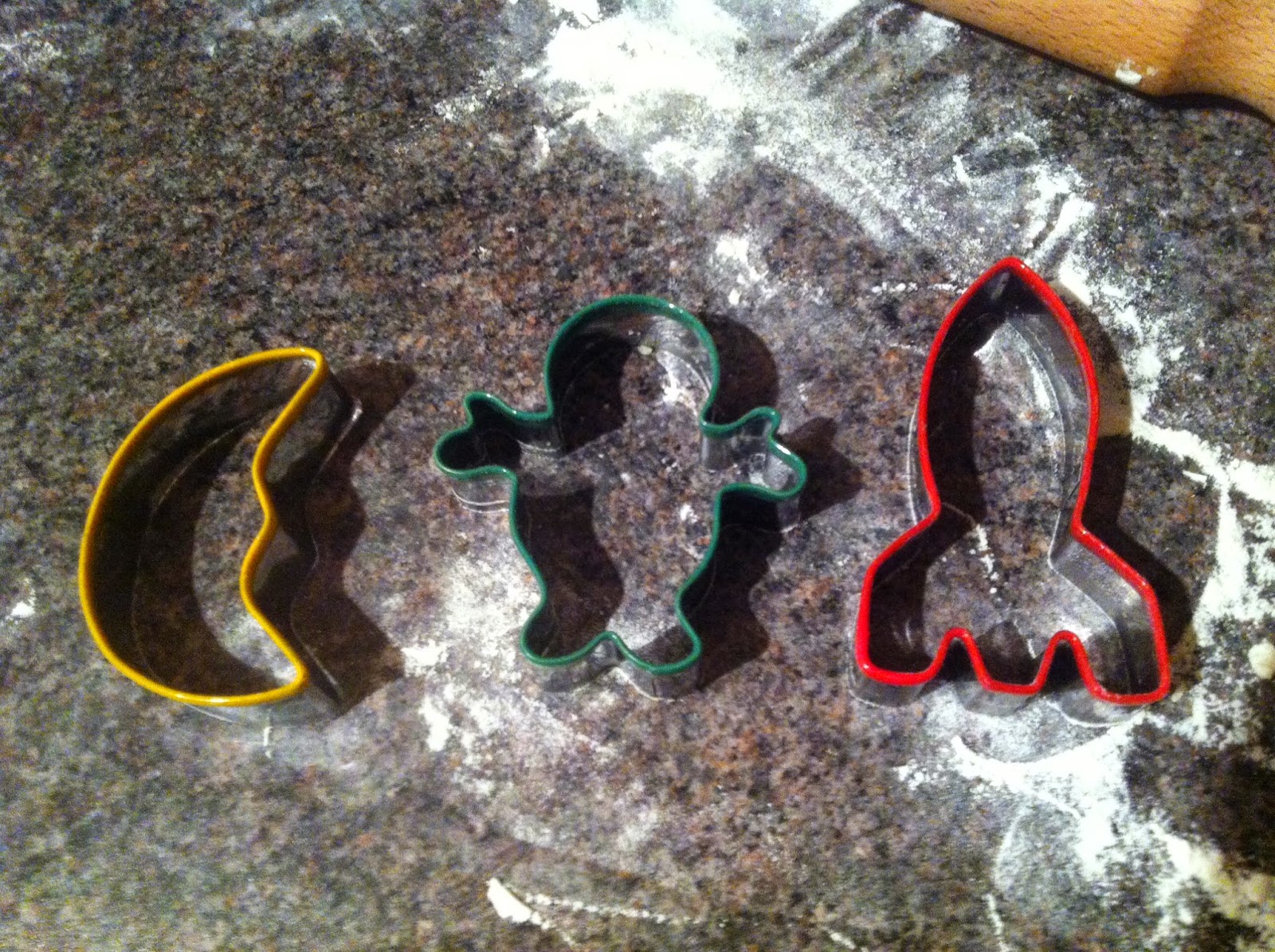 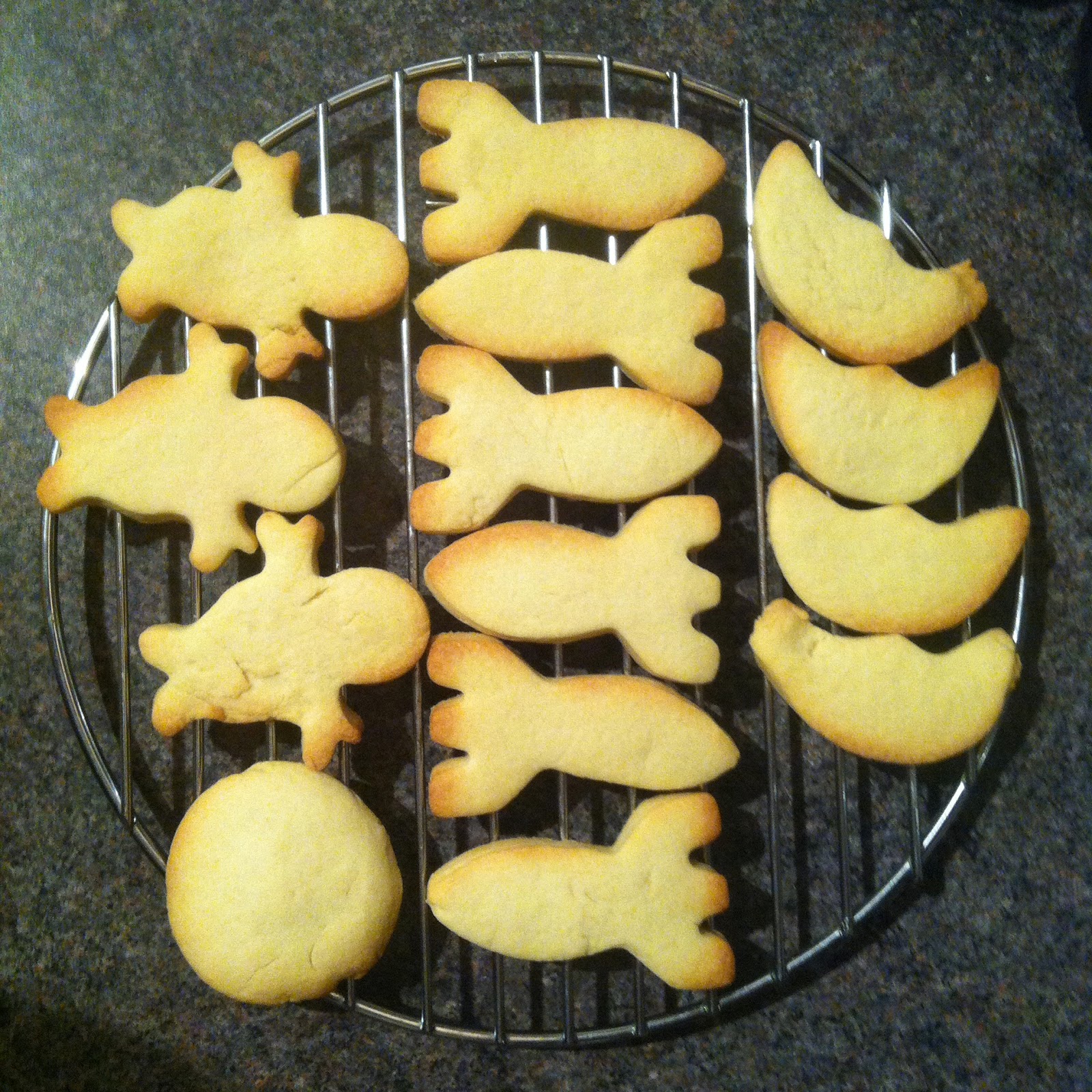 And excuse the poor photos, apparently we're good at eating food before I get round to getting the proper camera out!
Posted by Vikki at 20:44