All the colours: more adventures in yarn dyeing

In April I made my first attempt at dyeing my own yarn, and had a great time. When I bought the Kool Aid for that round of dyeing, I also bough several other sachets in a variety of colours with the intention of dyeing a few more skeins of yarn to make socks with. 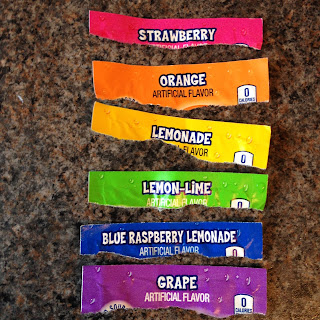 Well a couple of weekends ago, I finally got round to it, and decided that it might be a fun thing to do with my son. As autumn is rapidly approaching, we went for dyeing some aran weight yarn (West Yorkshire Spinners Blue Faced Leicester) to make into winter accessories for the kids. As the yarn comes in balls, the first step was to wind the yarn into skeins (wow, that made my arms hurt!). I made sure to add lots of ties to make it easier to untangle the skeins once they were dyed.

Once the yarn had been soaked for a bit, I mixed six colours of Kool Aid into individual pots of water, laid the yarn on some cling film in a big glass bowl, and let my son loose with some medicine syringes. He had a great time, squirting the colours all over the yarn. The dyes weren't put on as I would have done (a boringly conventional rainbow was my plan), but I went with it as he was having so much fun. When we ran out of dye, I wrapped the yarn tightly in cling film and put it in the microwave for several two-minute-microwave, ten-minute-cooling cycles (I don't know how many, we stopped when the liquid at the bottom was clear, probably four or five cycles). 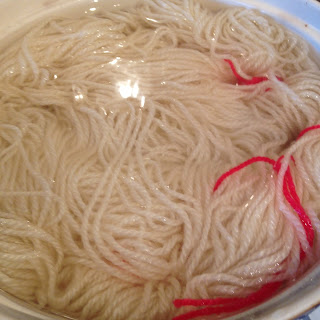 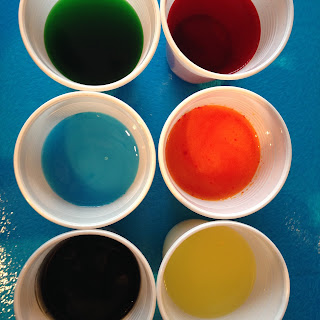 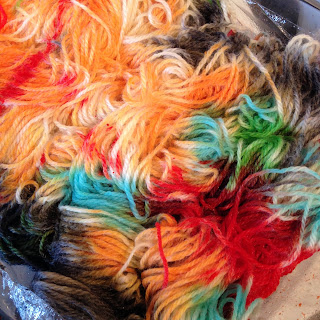 When I hung the yarn out to dry, I did think it was a little bright: my son's favourite colour is orange, which was rather dominant, and the yellow and blue had rather been absorbed by the other colours and vanished. But once it was dry, the colours had become rather more subtle. 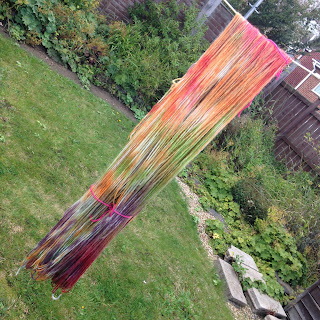 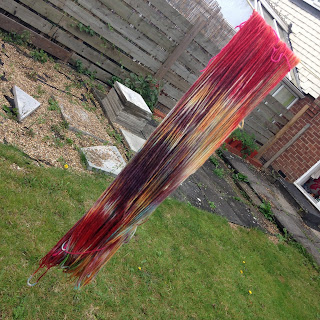 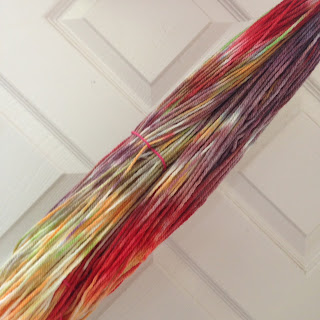 Now the yarn is in balls, waiting to be knitted into hats. I'm looking forward to seeing how it turns out! 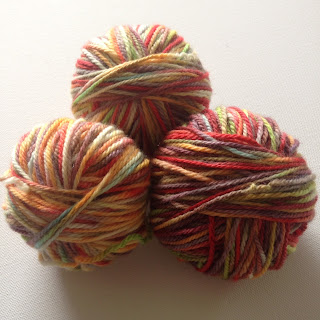