You may remember that when I started this blog I was hooking a Beatrice blanket for my friend's wedding in December. I might even have finished the blanket on time, but for the fact that I realised I'd made a mistake about 8 rows after I'd made it, and fixing that took so much time that there was no way I could finish it on time. So I took a photo of the blanket, put it in a nice photo frame and gift-wrapped the photo as an IOU wedding present, then put the blanket to one side for a bit. I finally finished it at a slightly more leisurely pace in February. As I knew I wasn't going to see the recipients for a while it's taken me until now to get round to photographing it! 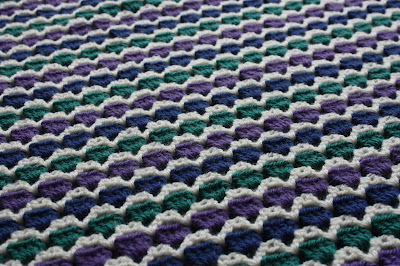 I really liked this pattern. The photo tutorial is very clear, and the pattern is easy to memorise - after the first few rows I didn't need to look at the pattern until I got to the final few rows to work out which row I needed to finish on.

There is one minor error in the blanket, but I didn't notice it until so far after I'd made it that there was no way I was going back to fix it. Sometimes it's nice for homemade gifts to have minor defects, they add character. That's what I'm telling myself at least! I also had to use two different dye lots of purple as I was aiming to work from stash. Unfortunately one dye lot is a bit scratchy but the individual stripes are small so the blanket as a whole feels ok. 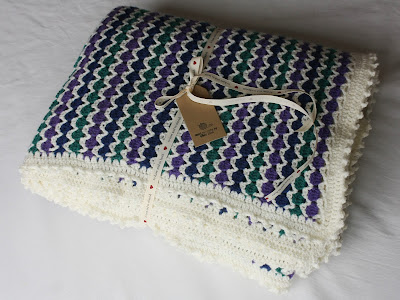 I was so enthusiastic about making the actual blanket that I didn't darn in the ends as I went. I really should have done as it took me two whole evening to darn them all in. Maybe one day I'll learn (but probably not; I don't hate darning in ends, but I do procrastinate about getting started).

I did have to look at the pattern for the edging, and while there was no photo tutorial for this bit, I managed it fine. I did have a slight problem at the start as I did UK not US doubles for the first bit of edging and it took me half an edge to realise - I only noticed when I looked at the picture of the finished edging to work our how the corners should look, so maybe a photo tutorial would have been useful, but never mind. The edging did take a while: as each edge is 2 m, there were 8 m of edging per round! 24 m in total! I found crocheting into the bumps on the reverse of the foundation chain, especially tricky, but it was plain sailing after that. 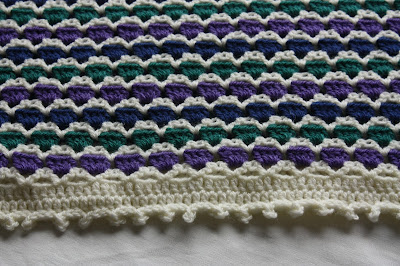 The blanket has now made it to its recipients, who seemed to like it. One disadvantage of large blanket type gifts is that you have to wait until you see people in person to pass them on! 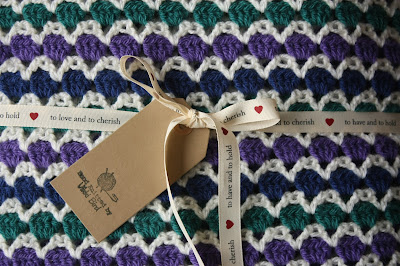