Every few months, Knit Now magazine has a call for submissions with a difference. Rather than the standard series of mood boards and theme suggestions, these calls give you some specifics about a yarn (a yarn weight, an amount of yarn, sometimes a combination of colours) and a weekend to come up with an idea. Yes, one weekend. Every time one of these calls comes up, I submit at least one or two designs, usually based on a stitch pattern that has been stuck in my head with nowhere to go. My Codebreaker cowl was a response to one of these calls, and here is another: the Rose Garden cowl, published in issue 49 of Knit Now, which is available today. 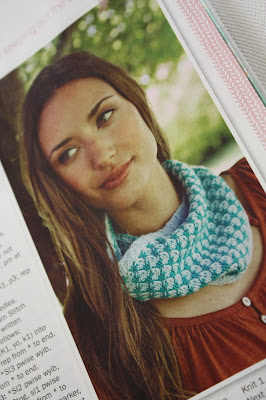 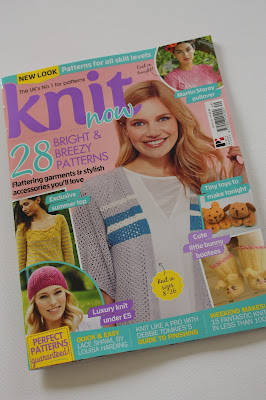 The Rose Garden cowl is based on a two colour slipped stitch pattern that I loved the texture of when I first saw it when I was browsing Pinterest one rainy afternoon (and here I discovered one massive disadvantage of Pinterest: every pattern for this stitch was in Russian, with no charts! I figured it out in the end!). When I knitted the swatch and sent it in to Knit Now, I was calling the pattern the Thistle cowl as I knitted the swatch in purple (my favourite colour), but when the yarn arrived, I had two fantastic shades of blue. I named the pattern the Rose Garden as the spikes in the stitch pattern remind me of Rose thorns.

Some patterns jump straight from the swatch to the final design with no further thought. This was not one of them! The design started off with a rolled stocking stitch edge, but when I started knitting the sample I realised that the yardage wasn't going to stretch to the original plan, so I had to make some modifications. The edging became ribbed and the tension loosened a little to make the yarn go a little further. And after knitting a third of a second sample I decided the rib I'd chosen didn't work with the rest of the design, so the whole thing had to be unravelled again, argh! But I got there in the end (with a bit of frantic 2am election night knitting thrown in for good measure as the deadline drew closer), and I hope you all like the finished result.
Posted by Vikki at 12:37