I told you last week about my last round of yardage chicken, that thankfully came out in my favour, but the final cardigan was too girly for the person I was making it for. So I cast on a second in a more boy appropriate colour way. 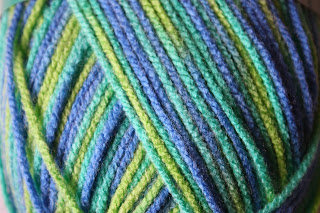 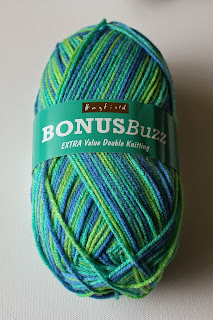 This yarn (Hayfield Bonus Buzz) is really well thought out, with the lengths and order of the three colours constantly varying so you don't have to worry too much about the crazy pooling that sometimes happens when you're working with variegated yarns on a constant number of stitches. I did find that it went a little static occasionally while I was working with it, but that might just be me.

I skipped the tension square phase as I've recently used Hayfield Bonus DK and, in my head at least, they should be comparable. I happily knitted the yoke, using my birthday fruit stitch markers, which really made me smile, then sped through the body. I made the buttonholes slightly closer together than on the last Beyond Puerperium, my plan being that I would end up with one more buttonhole for the same number of rows. To be on the safe side I measured the cardigan after the sixth buttonhole and realised it was already the right length. Apparently my row gauge was rather looser in this yarn than with the Stylecraft! So six buttons it is, which is fine by me - more chance of winning the game of yardage chicken!

I managed to finish both sleeves with only a little stressing about whether I'd have enough yarn, and when I finally weighed the finished cardigan I discovered it to be a pretty close call as the cardigan weighed 99g! I added some cute green star buttons to finish, and am really pleased with how it looks. Hopefully it will be appreciated by its new owner. 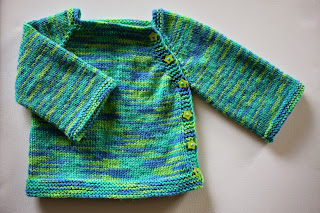 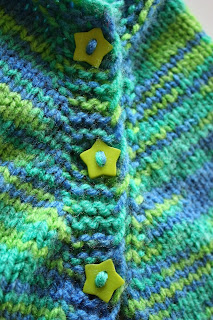