Monday was one of those days. We were late for playgroup as when we got to the car park my son decided he didn't want to go to playgroup after all; I forgot to return my library books, even though they were due back last Friday; my son fell over twice; when we got to the end of our lunch my son then complained that I hadn't shared my scone with him, so we had to buy another scone to share between the three of us... And the weather was horrible. And to top it all off, I accidentally ate a one mouthful of a Maryland chocolate chip cookie, so have failed on one Lent resolution (I shall continue not to eat chocolate until Eatser, but it is not good to have failed so soon. Turns out I think those cookies are more biscuit than chocolate).

So by mid-afternoon I decided I was in need of a treat. Earlier in the day I had been browsing chunky weight patterns on Pinterest and found a cowl that I thought would be perfect for my February yarn box yarn from Devon Sun Yarns, the Accidental Cowl by Elizabeth Trantham. A super-easy cowl, just double and half double crochet to make a long double-looped cowl. So when we got home from our supermarket shopping I fished the yarn out of the cupboard and wound it into a lovely soft squishy ball. I then set about crocheting a couple of tension swatches. The pattern called for a 9 mm hook, but I only had a 10 mm hook, so I made a small circular swatch, then measured it. The pattern itself doesn't state gauge, but it was easy enough to calculate at about 5.75 sts to 4 inches. My tension was nowhere near: 8.5 sts to 4 inches. So I went to find my next biggest hook, 15 mm, which seemed excessive, but worked pretty near perfectly, with 6 sts to 4 inches. I suspect this yarn will stretch on blocking, but didn't want to cut it, so am risking the stretching - it's for a cowl, so size really isn't critical. I recalculated the stitch count based on my gauge to be 81 sts, and put the yarn in my bag ready for my Monday evening knitting group.


While I was making tea I thought I'd try something new and use a foundation-chain-less foundation chain as several friends have said it's much easier than working into the chain. I found lots of tutorials, but some were distinctly lacking on detail. After a bit of playing I got the foundation to work by following Purl Bee's tutorial. But that was a single foundation row, whereas I needed a half-double foundation row, so I worked through a set of written instructions and my test cast on worked first time!

I started the cowl at my Monday night knitting group (which I love; the people are lovely and we're all very good at encouraging each other, and most weeks there is pudding!), and while the cast on was much faster than crocheting into the chain, it still wasn't quick to cast on 81 sts! I got there in the end. The cowl was quick and easy to work up, and I loved watching the pattern from the variegated yarn appear. I didn't quite follow the pattern, and actually alternated double and half-double crochet (I had done the tension swatches wrong accidentally, but liked how the fabric turned out). I didn't quite get the cowl done before I went home at 10, but I did finish once I got home; I worked until I ran out of yarn, so my cowl has 6 rows, finishing on a double crochet row. 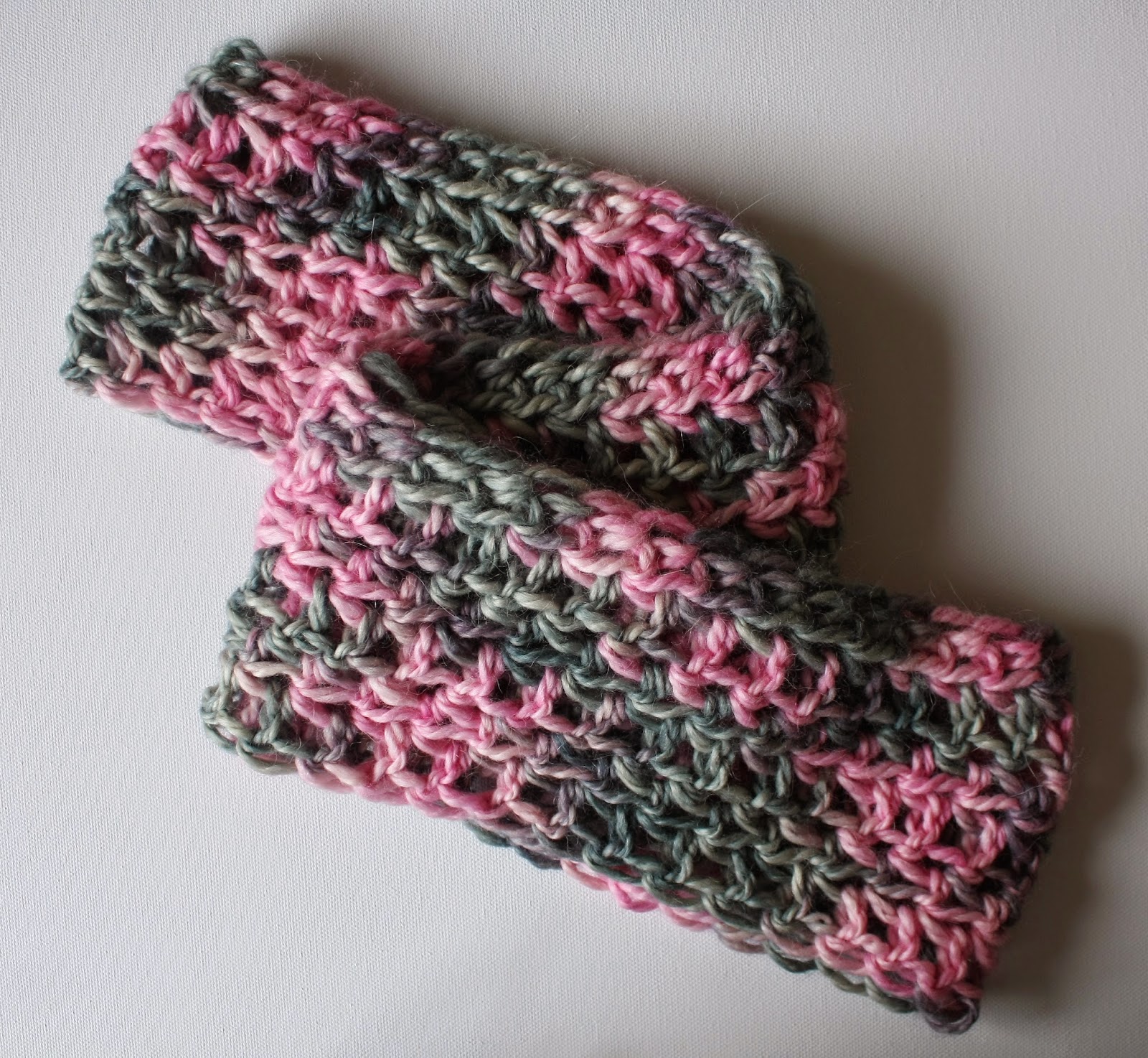 The cowl is simple but effective. I love the drapiness, and it being wrapped double means it's really cozy. I'm skipping the blocking step - I put it on to take photos and haven't got round to taking it off again! 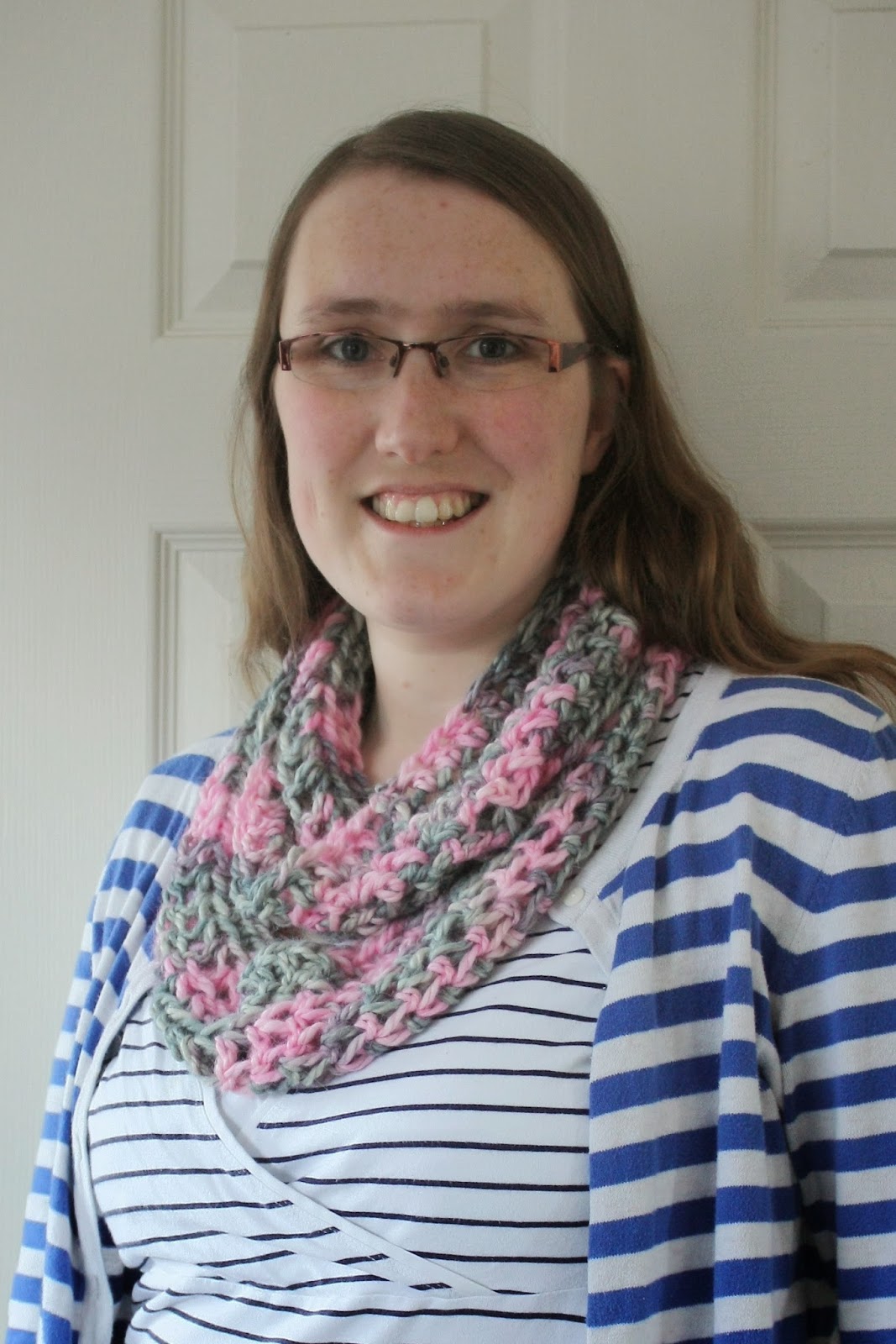