Socktober: Pairs #2 and #3: The tale of two pairs of rainbow socks

Over the past few months I have been stashing beautiful sock yarn faster than I can knit it. In honesty, I was a bit scared of knitting 'the good stuff' as I'm not 100% confident in my ability to make socks that fit properly. But for the whole of September I was a bit miffed that I don't have enough pairs of hand-knitted socks to wear them every day - I have four pairs, and realistically they're only going to get washed fortnightly at most, which leaves me with ten days in a fortnight that I don't have lovely socks for. So in September, I looked through the sock yarn box and chose to cast on something gorgeous: Cuddlebums Twlight Rainbow in Donegal Nep.

This yarn has been in my stash since my birthday in April, and apparently needed Autumn to happen for me to cast it on. I chose to knit a new pattern, one from the toe up, but that has gussets - my knitting of hand-knitted socks so has taught me that I like knitting them toe up best, but that my feet like wearing ones with gussets best. I merged a basic pattern with a slightly more complicated one (Zigzagular) for interest.

The yarn was wonderful to work with. Completely crazily pooled, but I love that it looks a bit like a sari in its colour scheme, and can't help but make me smile. I struggled a bit with the heel, but that was probably just because I wasn't paying enough attention, and knitting them two at a time wasn't covered in the pattern, so I had to guess that bit. But it worked well, and is a really nice heel, with its slipped stitch reinforcement at the back of the foot as well as on the heel flap. 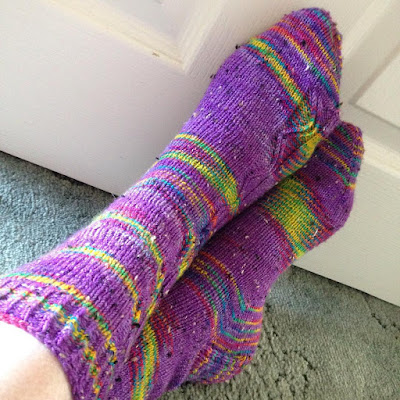 The finished socks are my current favourites. As soon as they're dry from washing they're back on my feet. And my husband has been admiring them, so he's going to get a pair too.

A couple of weeks ago we went to see a friend who we hadn't seen in a few weeks. Things have been a bit tricky for her recently,  but her birthday was coming up, so I decided she could do with something hand made to cheer her up (she is one of the most knitworthy person I know). It being Socktober, I went for socks, and rummaged through the stash to find something beautiful, but struggled to find something that would really suit her. I then remembered the yarn I won from Mothy and the Squid in September (which hasn't yet made it to stash - it has its own special box), and cast on a pair of socks in Silver Skies Rainbow - grey with a rainbow splash and silver sparkles. 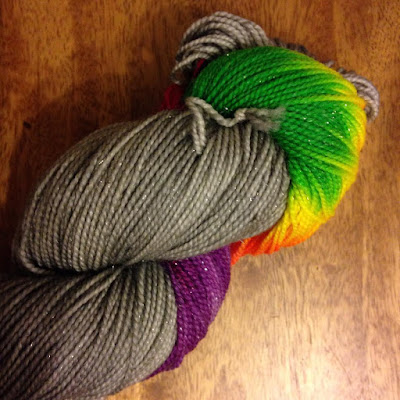 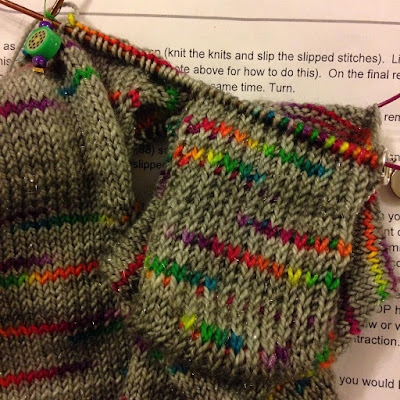 These socks were lovely to work up; I liked the reinforced heel so much I used the same pattern as for the Twilight Rainbow socks, but minus the zigzags. The yarn kept me guessing the whole way through, and I raced the rainbow splashes, getting the socks done in a record five days (admittedly these socks are for size 5 feet, not my monster 10s)! I haven't yet passed them on to my friend, but I am hoping she loves them as much as I loved making them. 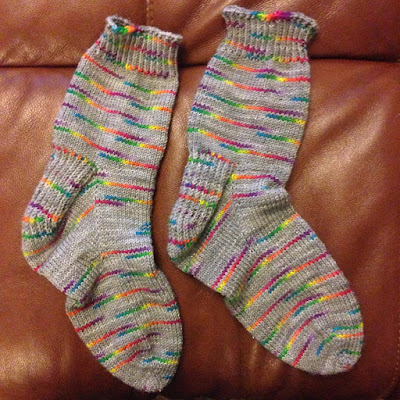 I think that's probably it for completed socks for Socktober. I have cast on a pair of West Yorkshire Spinners Blue Tit socks for another friend, but they're not going to be done by the end of the month. What has everyone else managed for Socktober?
Posted by Vikki at 17:06