Tarte Tatin has been on my to-bake list for a while now (it even made it to my 32 things list). We keep seeing them being baked on programmes like Masterchef, and they always make a hooha about them being a bit tricky, but I've never really been sure why, surely it's just puff pastry, apples and caramel. Obviously there are things that could easily go wrong: I've burnt caramel before and it's not all that nice, and you have to flip the whole thing at the end, which could result it a rather sticky floor and no dessert, but I thought it was worth the risk.

I went for a Jamie Oliver recipe (mostly because it was the second result on Google, the first being the Wikipedia entry, but also because I've followed his recipes before and they usually work pretty well) and after a trip to Sainsbury had all the requisite ingredients. The ingredients were rather more expensive than I anticipated, mostly because I had to buy 500ml of Calvados (apple brandy), even though I only needed 100ml! 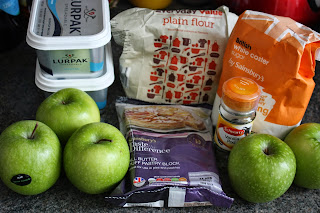 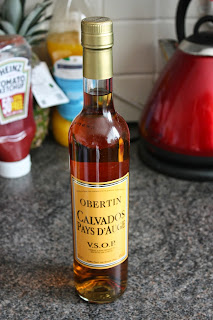 Step one was to roll out the pastry to be the size of the pan, with an extra 5cm all the way round. Easy enough, although my pastry was a long way from circular as it started off as a square block and I was feeling a bit lazy! 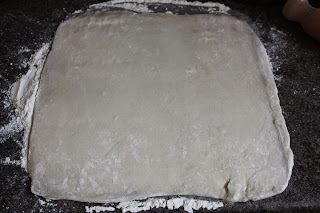 Step two, peel and chop the apples. The recipe said to remove the cores using a teaspoon. This does not work with Granny Smith apples (and I wasn't going to sharpen a teaspoon for the purpose!), so I used a knife instead and cored them in the conventional manner. 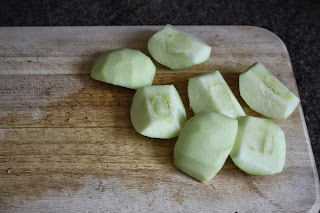 Step three, make the caramel. Here I hit a slight problem. The only pan we have that works on both the hob and in the oven is a griddle pan, which wasn't ideal. It was pretty hard to stir the caramel, and even harder to work out when it was caramelised as the inside of the pan was black. I had to go by smell to work out when the sugar and Calvados had caramelised, and I think I added the apples a little early as they never did get the 'toffee apple vibe' described in the recipe. I stirred the apple and caramel mixture until the apples had softened a little, then put the pastry hat on top, using my wooden spoon to push the excess pastry down the sides. 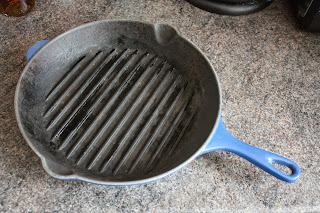 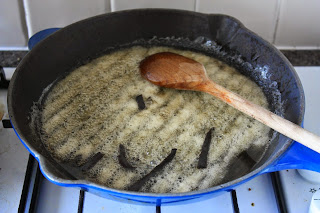 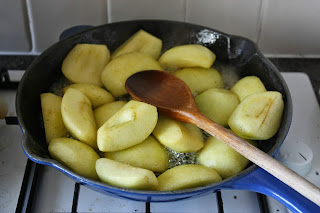 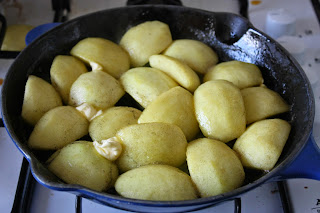 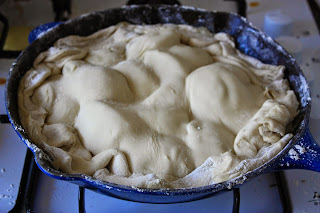 Step four: bake the tart. Easy. Did some washing up and drank some coffee to pass time.

Step five, remove the tarte from the oven, and flip. Terrifying! I didn't risk using a plate as that didn't allow excess area if it slipped while flipping and used a board instead. Using a board did not allow much room for manoeuvre, but it worked! The apples did look rather mushy, which was a pity, but I think just confirmed that I had under caramelised and over cooked them in the earlier steps. 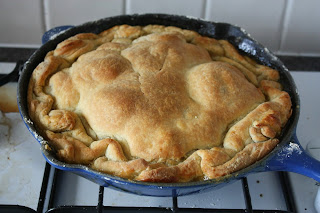 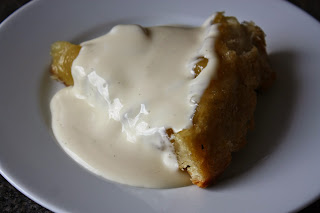 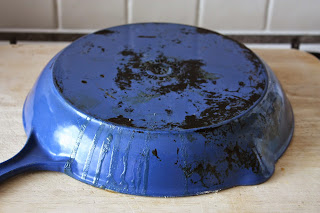 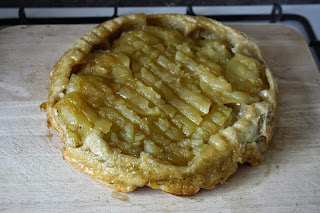 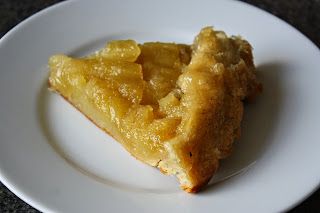 But it was delicious! And we have enough Calvados to make another 4, so maybe I'll do better next time!
Posted by Vikki at 10:38