Two things I was keen to do as part of my 32 things were knit a pair of 'non-vanilla' socks and join in on a mystery KAL. Sock knitters will know that non-vanilla socks are socks that are more than just stocking stitch and rib: socks with lace, or cables, or colour work; while a mystery KAL is a knit along where only the designer knows what the finished item will look like, with the pattern being released in instalments to keep the finished object a mystery for as long as possible.

I've been reluctant to join a mystery KAL in the past as all the items I'd previously knitted are things that other people can see - hats, scarves, mitts, etc. - but now I've mastered socks I have a new avenue open to me. No one really looks closely at your socks, so I could risk a mystery KAL, as even if I wasn't that keen on the final pattern, I'd still end up with a functioning item, even if it was one I didn't enthuse about all that much! So for the past couple of months I've been keeping my eye out for mystery sock KALs.

There are plenty of sock enthusiast groups on Ravelry, and many have mystery KALs every month or so, so I had plenty of opportunity, but nothing grabbed me until I can across the Coexist KAL, May's mystery KAL in the Sock Knitters Anonymous group.* The pattern is inspired by fandoms, with each clue being based around a different set of fandoms, e.g. sci-fi, fantasy, etc. In fact each clue has at least four options to choose from, which means everyone's socks are slightly different and completely personal.

The KAL started on May 1st with the cuff and leg clues being released. The cuff has four options: Doctor Who, Star Trek, Star Wars and Firefly; I chose Doctor Who as I'm a bit of a fan, and I loved the name of the chart (Timey Wimey Wibbly Wobbly). I cast on as soon as I could, although it did take me three attempts to get a yarn/needle/fit combination that worked for me. The chart is more complicated than any sock I've ever done (this is only my fourth pair of socks, so that isn't much of a surprise), but the actual knitting was actual alright, once I'd got used to doing cables with such tiny yarn.

Then onto the leg. Four more options, all on a fantasy theme: Narnia, Lord of the Rings, Harry Potter and Game of Thrones. The decision was much harder for this section as I've either read or watched all the options. I went with Harry Potter, as I liked the chart best, which is as good a reason as any (if I was choosing blind I would probably have gone Narnia or Harry Potter). I've found this section really slow, but not unpleasant. It's been nice to watch the pattern emerging, and I'm really pleased with how the socks look now I've done a couple of repeats. I still have a couple more to go, but repeat two was faster than the first, so these final two should go a little faster. 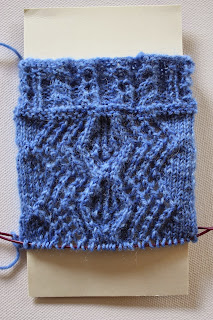 The heel and gusset patterns have already been released, but I'm concentrating on knitting the first clue for now. I love the concept behind this pattern - it reminds me of the 'choose your own path' books I read when I was younger where there are many different chapter options and you choose an option based on what you want to happen next. I'm also enjoying seeing what other people have chosen, and why, in the associated forum. At the time of writing there are 320 options (assuming you only choose one design per section - several people have chosen to mix and match making fraternal pairs), and that's without including the foot options!

Should you wish to join me on my mystery KAL adventure, the pattern can be found here. All the clues will be released by the end of May.

And if you want to join in a KAL where you know the outcome, I'm still running my Ronnie the Robot KAL in the Knitting for Boys group on Ravelry, also until the end of May.* 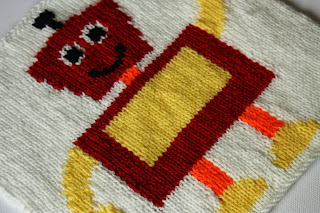 *Note you need to be logged into Ravelry for this link to work. Membership is free.
Posted by Vikki at 09:00