The trouble with socks: Part 2

So, my sock knitting is well under way. Before I got started I mentioned to a friend that I had bought some sock yarn with the intention of making actual socks, and the next time I saw her, at our regular knitting group, she came armed with four different books about socks, and lots of helpful hints and tips. I left the knitting group with Ann Budd's Getting Started Knitting Socks, which sounded sufficiently idiot proof!

Over the next couple of days I read through the first few chapters of the book and established the basics (knit a tension tube, measure your feet, start your sock at the top, knit the leg, work the heel, knit the foot, shape the toe, Kitchener stitch the seam, repeat), then got to work with my tension tube using the smallest needles I own, 2 mm circulars. 4 inches and lots of measuring later I established that I was knitting at 7 1/4 sts per inch. I'd rather it was a little tighter (tighter equals harder-wearing socks), but I wasn't going to buy more needles that I might only use once. Circulars smaller than 2 mm are hard to come by (in the UK at least), and I am not a fan of DPNs, so 7 1/4 sts per inch it is.

The next step was to measure my feet, which was entertaining. Turns out my feet are different sizes, in fact I'm not sure they have all that much in common! I decided to go with the smaller foot, as they're not all that different really (and I'm definitely not making two socks in different sizes, that would be too confusing!), which measures 9 3/4 inches at the widest part, giving a stitch count of 70.6875, which isn't terribly practical. My first thought was to go for 70 sts, but a brief look through the book (which gives the stitch count for lots of gauges and sizes) told me that socks need a stitch count that is divisible by 4, so I went for 72 sts instead. 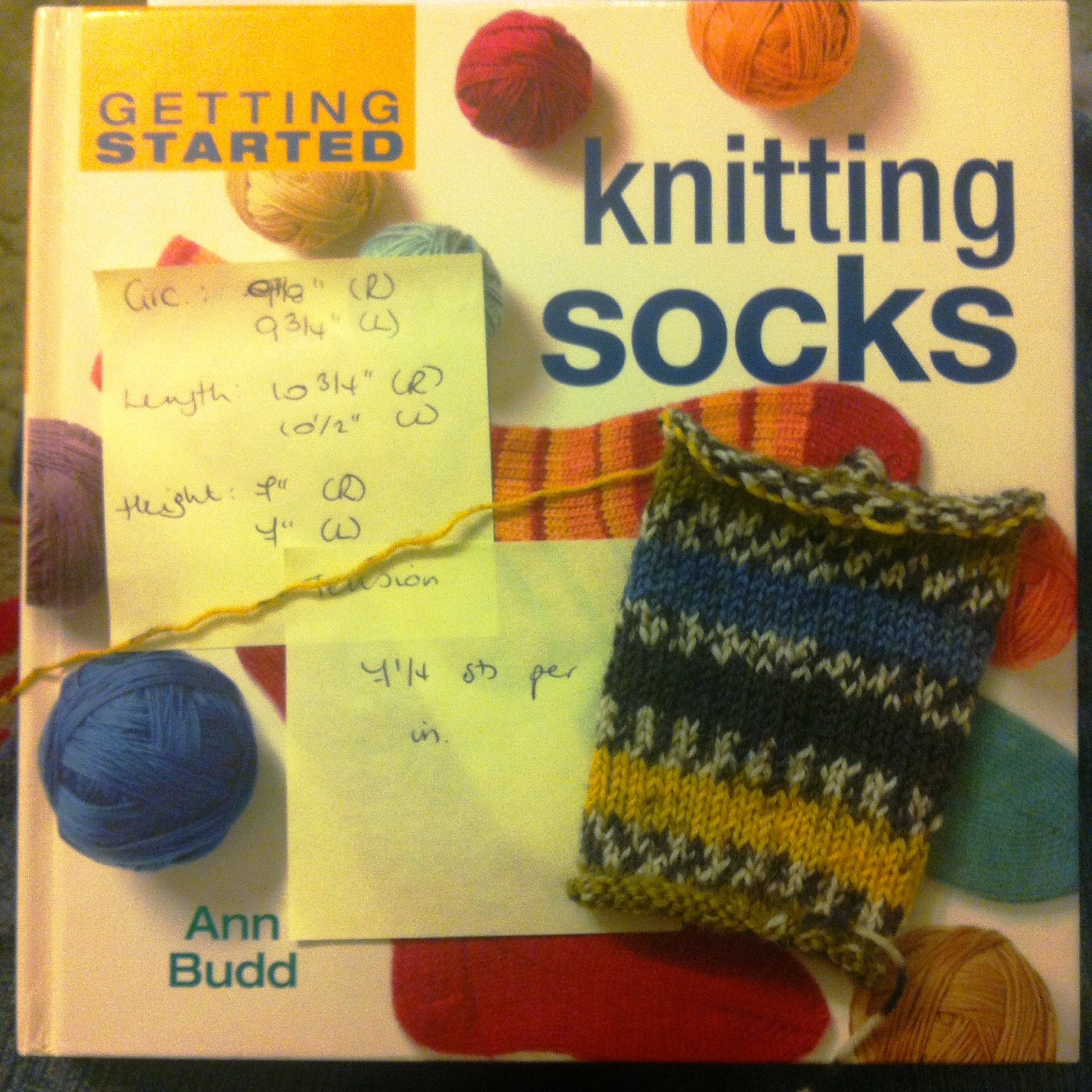 The book recommended using the long-tail cast on to make the sock top stretchy enough. The cast on requires tying a slipknot halfway along the length of yarn being used for the cast on, handily the book also gave a hint on estimating the length on yarn needed for the cast on - if you wind your yarn round the needle 10 times, that gives the amount of tail needed for ten stitches, so multiplying this length by 7.2 gives  the length of tail needed. I wanted the cast on to be single colour, so had to measure the tail from a colour changeover. 25 inches was the number I came up with and it was pretty much perfect (the transition between the coloured section and the stripy section occurs exactly at the end of the final stitch cast on, hooray! Apparently sock knitting requires a lot of note-taking to ensure you get two socks that look the same, so I now have a post-it note stuck in the sock knitting book with 25" written on it; the note also says that I knitted 14 rows of 2x2 rib at the top of the sock, which should hopefully be enough ribbing to hold the sock up...

I haven't been dedicating a huge amount of time to knitting my sock (I've been busily archiving all of last year's photos, and trying to get on with the belated wedding blanket instead, both of which have come slightly higher up the priority list), but it has been steadily growing - a couple of rows while I feed my increasingly wriggly daughter, a few more during my son's swimming lesson, the odd row here and there while cooking dinner - the yarn is much finer than anything I've knitted before, but it's easy enough to get into a rhythm with it, and the watching the stripes appearing is very encouraging (I've definitely found myself saying 'just one more stripe, then I'll put it down' several times over the past week). I'm also enjoying that it's so portable - I really can just throw it in my bag, which has definitely helped as I can knit one or two rows at a time when I'm out and about.

And suddenly, without realising it, my sock leg is the requisite 8 3/4 inches [or 83 rows, another number for that post-it note (at least it's probably 83, I counted five times and got 82 twice and 83 the other three times...). I'm using the standard length from the book as I'm not really sure how I want my sock to fit]! Now to brace myself and tackle the heel... But that might have to wait a bit, I'm not sure looking after two small people is conducive to getting a heel right first time! 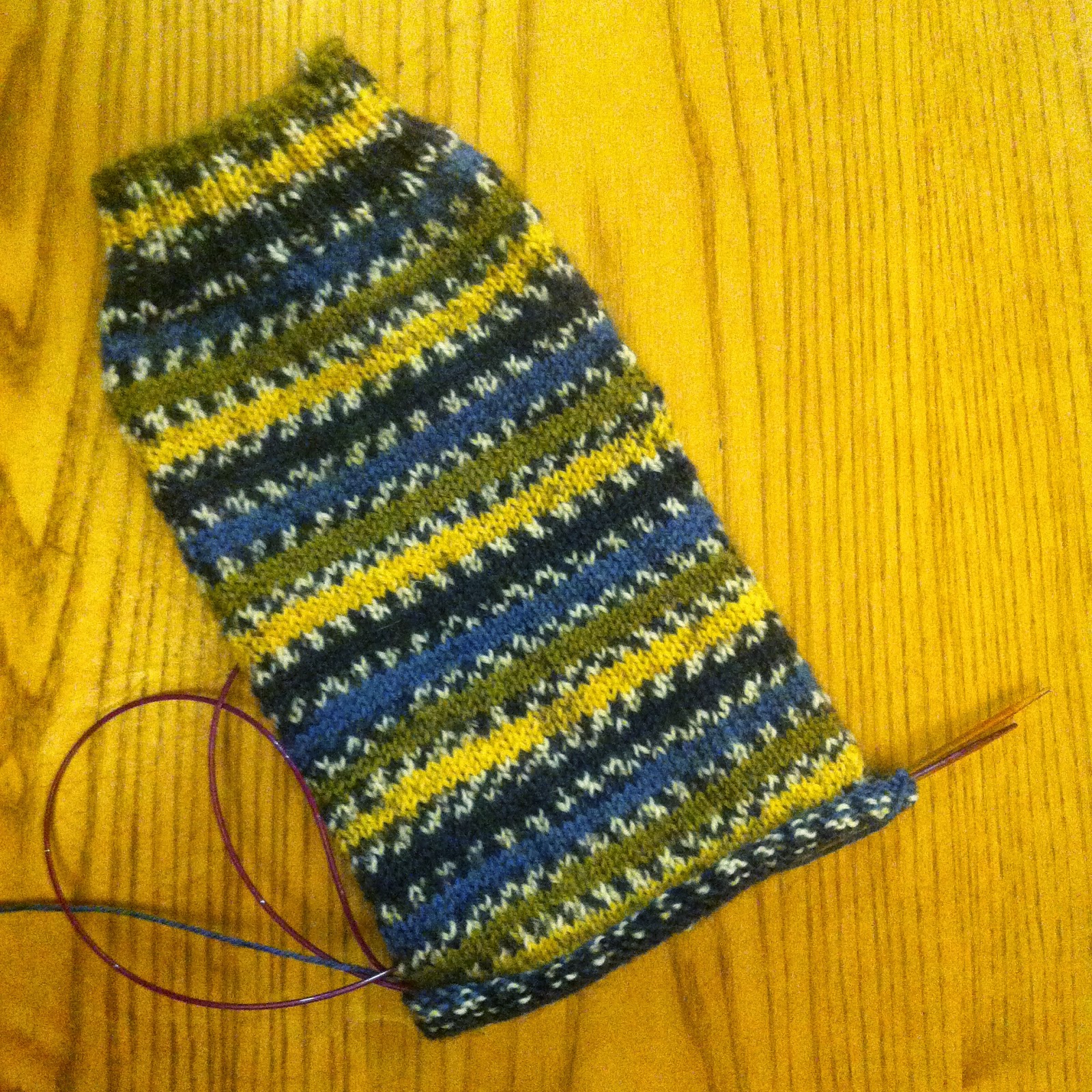