Suddenly winter has arrived. Standing outside last week to watch fireworks was cold! I did a quick ferret through the winter clothing box and realised that my favourite hat (purchased as an emergency hat in winter 2010/11) had seen better days. It's not going to last much longer. So on Thursday morning I cast on a new hat.

I don't really wear hats. Most of my coats are purple, so don't really go with my preferred colours for accessories (greens, blues, turquoise, teal, plum and purple, jewel colours), which leaves grey. Which isn't very exciting. But a grey hat will be worn, so grey it is. I found some Stylecraft Life aran in slightly variatated dark grey in my stash (it had been destined for a hat for my husband, but I probably have 100% more than I need) that looks pretty much perfect. And there's the added bonus that I like working with it, and it'll make a good hard-wearing hat. And it's fairly cheap, so should my hat vanish (winter accessories do that) I won't be too heart-broken. 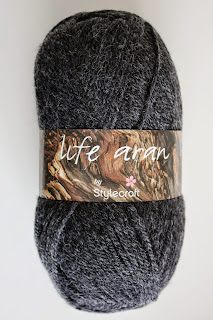 The pattern decision was easy. The Knitting for Boys group on Ravelry have been having fortnightly KALs in the run up to Christmas, and last fortnight's was hats designed by Justyna Lorkowska (Lete's Knits). I had fully intended knitting Dripping on the Side (don't like the name, but love the pattern) during the KAL, but life got in the way, so I got as far as buying the pattern. Handily Justyna's Ravelry groups is currently having a winter KAL, so I've transferred over there for knitting this hat - I do like a good KAL, it's lovely feeling that other people are cheering you on! And they make me more likely to finish things...

My tension is in the loose side, so I needed 4.5 mm rather than the stated 5.5 mm needles. The pattern said to use 4 mm needles for the ribbing so I look a guess at 3.5 mm needles. Which was an error! I was knitting the larger size but the ribbing was a tight fit on my toddler! So I ripped it out and started again with 4 mm needles.

As an aside, I cast the first attempt on in a coffee shop while my daughter was sleeping in her pram and had a lovely conversation with an elderly lady about knitting in general and my knitting technique (a rather unconventional cross between British and Continental knitting - to a British knitter it often looks like I'm knitting left handed). Any how, it was lovely chatting about knitting and I certainly didn't mind the interruption.

The hat knitted up really quickly (a few months ago I taught myself how to knit cables without a cable needle, a total revelation - previously I would have avoided cables as I hated picking up and putting down the cable needle; I'm so much faster now I don't have to hunt for the cable needle every few rows!) and I finished it on Saturday afternoon, and have been wearing it every time I've been out since. I'm not totally sure about it. I adore the cable, but that hat itself is too slouchy to be a beanie, but not slouchy enough to be properly slouchy; if I make another I think I'll add an extra section to the start of the cable to make it more slouchy. Not that it really matters, it's nice and cosy, and gives me an excuse to knit another hat once my 'must finish' projects are finished! 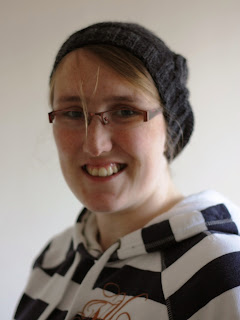 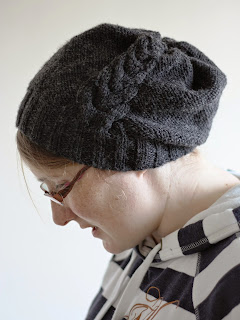 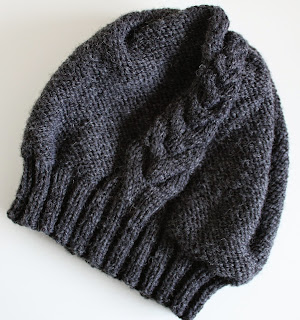