One of the things on my 32 things list was to visit a big yarn event. Finally, last weekend, that actually happened, and I made a trip to Skipton to visit Yarndale. Yarndale is a two day yarn event held in Skipton Auction Mart and is now in its third year. It's a big event, with over 180 exhibitors, a few sheep, a couple of alpacas and a selection of workshops.


I had been looking forward to Yarndale for some time, even when I realised it would just be me and my daughter going as all the other people who would have been interested in joining me already had plans. Durham isn't that far from Skipton (a couple of hours), so rather than driving down the night before and staying somewhere closer, I got up early on Saturday morning and had an uneventful two hour drive, enjoying the scenery as I got closer to Skipton, which is in the middle of the Yorkshire Dales, and getting more and more excited. Parking was easy - Skipton Building Society has its headquarters in Skipton, and they had allowed use of their car park for the weekend, and mini buses had been put on to ferry people over to the auction mart. Unfortunately the queue for the mini buses was quite long, so I, along with several other people, walked down to the high street to catch one of the bigger, double decker, buses from there to the auction mart. On my walk I had a lovely time chatting to other people on their way to Yarndale - everyone I met was very friendly. I ended up walking with three other people and we totally overshot the bus stop, and ended up walking all the way to the railway station, not that it mattered - we caught the same bus we would have done had we stopped at the first bus stop, but got to enjoy some sunshine!


I finally made it to the auction mart some time after 11, by which time the entry queues had vanished and I got in really quickly. The auction mart was rammed with people and stalls, so I decided it would be easiest just to walk methodically up and down the aisles so I could see as much as possible. I had been very good before I set off and wrote a list of the things I hoped to buy, and had set a very strict budget, so decided that I would look round the whole event before I purchased anything, to make sure that everything I bought was something I really wanted. This was actually pretty hard as I saw many, many amazing things! I loved all the things being sold by Max's World - yes, I need ball of wool earrings - and the colours of yarn sold by Triskelion Yarns were pretty unbelievable in their intensity. I also loved the project bags and needle cases made by Quince Pie, which I'd previously seen on Etsy, but they were much more lovely in real life. I had a nice time chatting to Joeli of Joeli's Kitchen, and she gave us a couple of scraps of sock yarn for my daughter to play with, which was excellent as it stopped her grabbing the yarn from stall shelves!

By lunchtime, we had seen about half of Yarndale and my daughter and I were getting pretty tired and in need of fresh air, so I popped to the Yarndale hub to buy a Yarndale bag (an essential purchase from my list, and essential by the time I bought it to keep hold of all the leaflets and business cards I'd picked up). I joined the queue for food, but after a couple of minutes realised it wasn't moving as fast as I needed it to, so went and sat at a picnic bench outside in the glorious sunshine, let my daughter have a run around and between us we ate all the emergency snacks from my bag, with the promise that we'd have something better at about 4 when things had quietened down.

After lunch we went back into the auction mart (which had become slightly less busy), and browsed the rest of the stands. I saw lots of lovely things to buy, but the only impulse purchase I made was a set of 2mm 9 inch long circulars for socks as Purlescence were down to the last set, so I thought I ought to buy them while I could - not an item on my list, but one that I am looking forward to testing out, even though I'm not sure they'll work for my hands. I loved all the colours on the EasyKnits stand, but soon realised the problem of not buying things when you saw them: certain colourways and products were selling out fast. I had wanted a flash yarn - one with a white background and a flash of colour on one end of the skein, but by the time I got to the EasyKnits stand they only had three colours left, and they weren't colours I fancied. And at fivemoons the gradient packs I'd wanted had also gone (although the stall holders were amazing at suggesting other people that might sell what I wanted; turns out everyone at Yarndale wants every to leave happy and with yarn!).


As I'd been walking round Yarndale I'd had a notebook in hand, noting down things I wanted to go back and have another look at. This was a tip from my friend Lynda, and I am so glad I did it, otherwise there are many things I would never have been able to find again! Once I'd seen everything I looked at my list and worked out what I was going to buy. I didn't stick rigidly to the list in the end, and several items got substituted, as you can see: 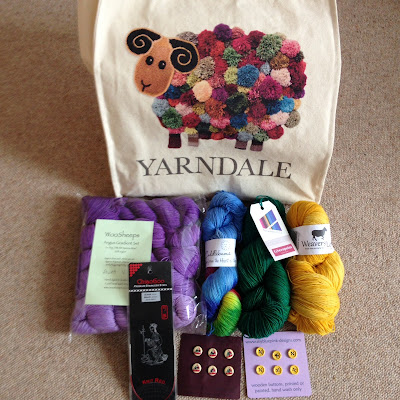 At 4 pm we left, tired but happy. There were a couple of stalls I would loved to have gone back to, but I was out of energy and my brain could no longer navigate! I swear I shall dream about the Triskelion Yarns stall for months to come, but I never made it back to them. We chatted happily to people in the bus queue and admired their purchases, and once we were on the bus back to the centre of Skipton enjoyed admiring the yarn bombing in the bus ("The sheep on the bus go baa, baa, baa..."). I was very glad though when we found a cafe to sit and have a drink and some cake in before heading to my friend's house for the night.


In summary, Yarndale was lovely. I had a lovely time chatting to stall holders and people I walked into as I walked round; I was delighted to meet several people who I recognised from Instagram and Facebook, and Jodi from Cuddlebums (I could have bought her entire stall), as well as many, many other people whose names I didn't necessarily catch, but who made the day excellent. I am very happy with my purchases; I got to see my socks on the sock washing line; and I stuck to my budget. I already have next year's Yarndale in my diary and one of my friend's who couldn't make it this year will be joining me. I might even get to leave the baby at home (she'll be two by then, two year olds and yarn do not mix!).

Excuse the poor quality pictures - I was getting too carried away with looking at yarn to get my proper camera out.
Posted by Vikki at 19:00