On Friday we were having friends for lunch: two of my son’s friends, their mums and a nine-month old. They’re friends we see frequently, and we love getting together to chat and to let the boys play. Our friendship started from a baby massage class when our boys were only 4 months old and we’ve stayed in touch ever since. As we were having lunch, I thought I’d brave bread making, which I haven’t done for a while. While I love the smell of freshly baked bread, and there is nothing better than eating bread straight from the oven when it is, strictly-speaking, too warm to handle, I’m not patient enough to make it, and am very good at forgetting that I’ve got it proving somewhere, only for it to escape the tin and go everywhere!

Making bread is actually pretty easy. I followed the recipe on the back of the flour bag, so I didn’t even have to go and hunt through the recipe book collection for an appropriate recipe, and the ingredients didn’t require a special shopping trip as they’re things we have in the house anyway.
Step one is to blend all the ingredients, resulting in a somewhat sticky dough that gets stuck to everything (my son loves this bit, he calls mixing by hand ‘hand whisking’). The dough then has to be kneaded, which is very therapeutic, and it’s very satisfying feeling the texture of the dough change from sticky mess to smooth elastic. 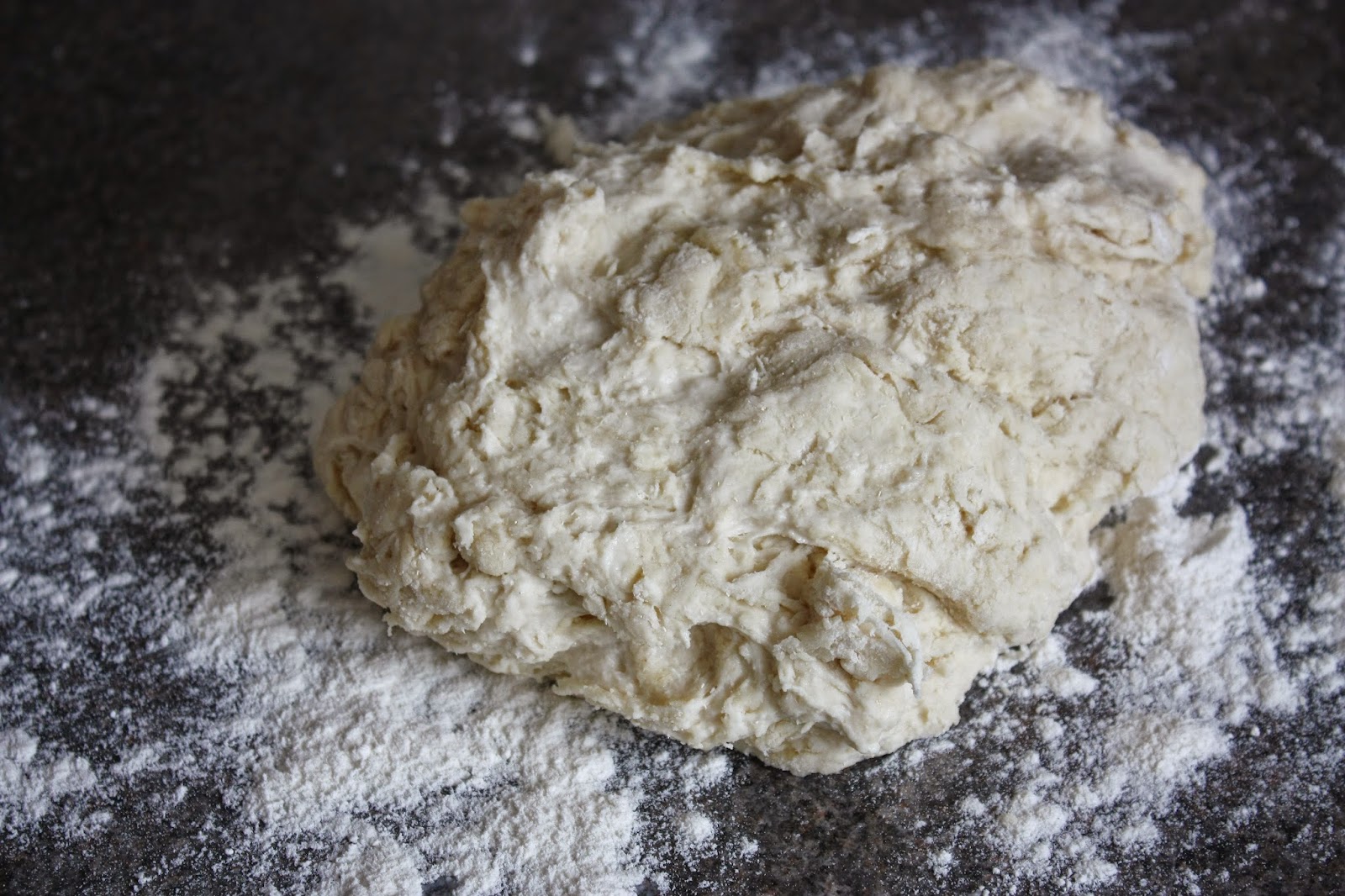 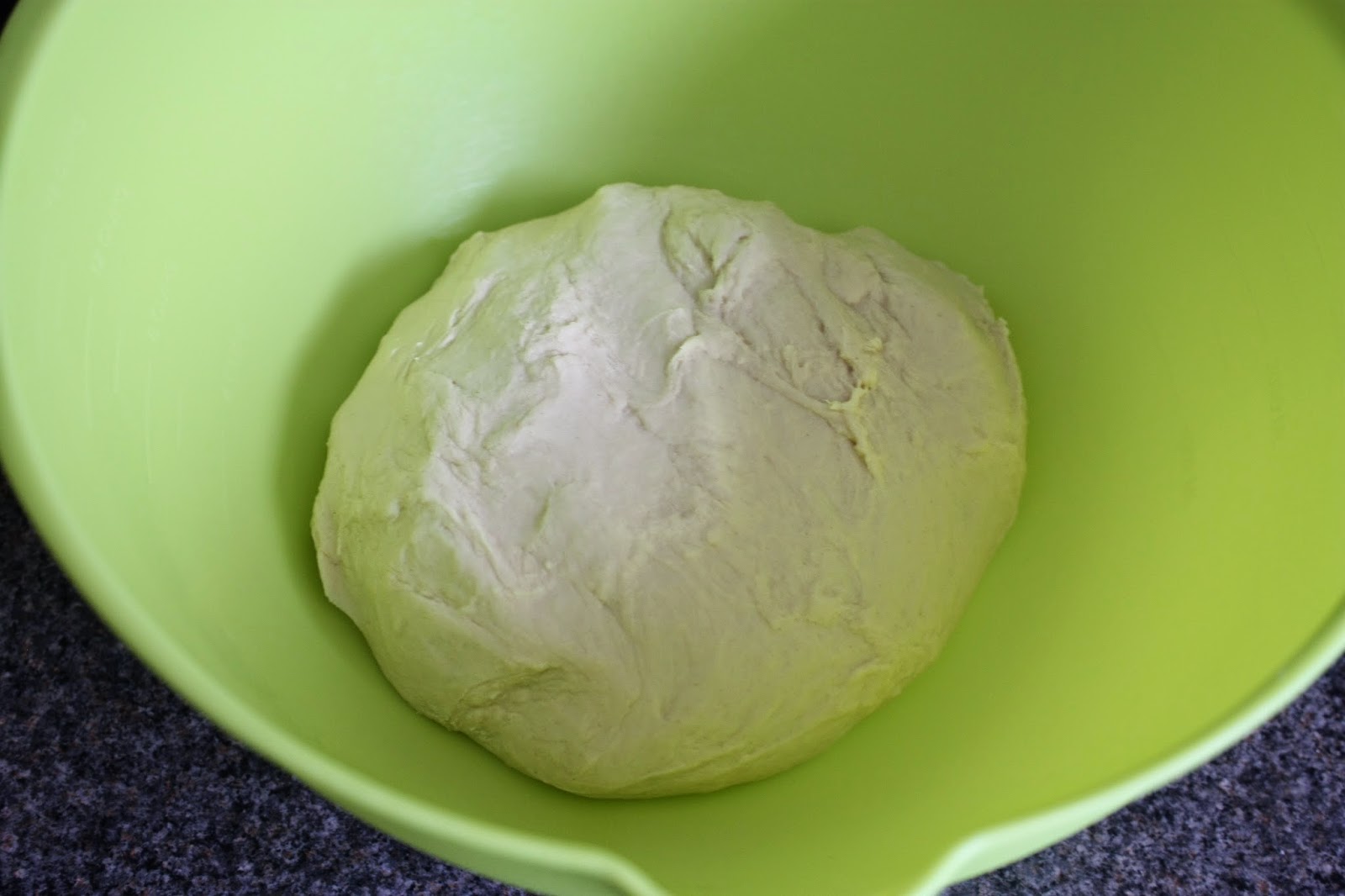 Then you get to leave it and get on with something else for a bit (mostly trying to get all the dough off the work surfaces…) while the yeast does its work and the dough proves. The dough is then squidged into shape, placed in the tin and left to prove for a second time before going into a very hot oven. 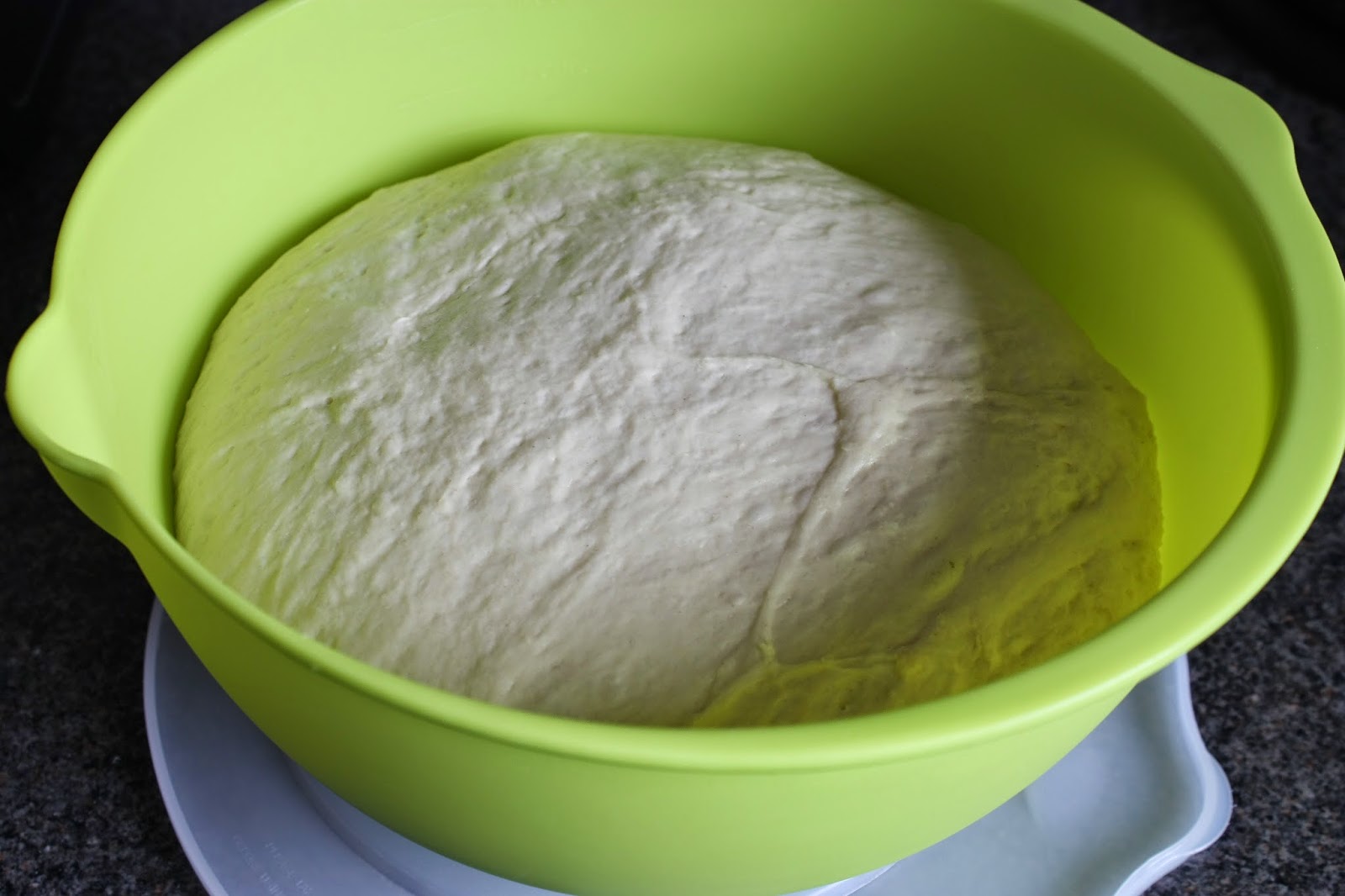 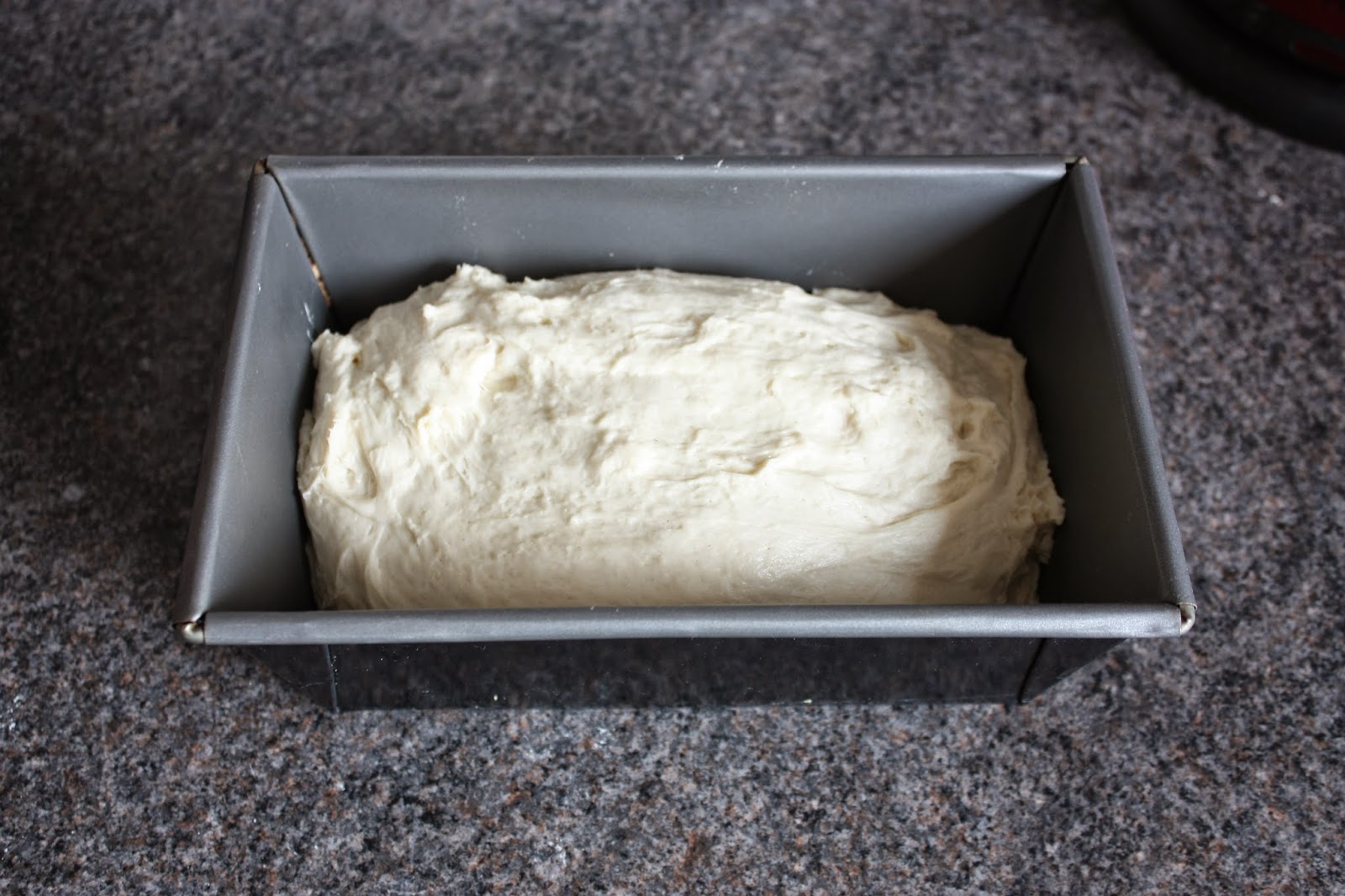 30 minutes later, there you have it. Hot, freshly baked bread. We were pretty impatient to eat it, so I sliced it straight from the oven (a bad idea if you want neat slices of bread and it’s not terribly structurally sound before it’s cooled), then we got on with the arduous task of eating it. Delicious! As you can see, we made pretty short work of it – within half an hour all that was left was a pile of crumbs. 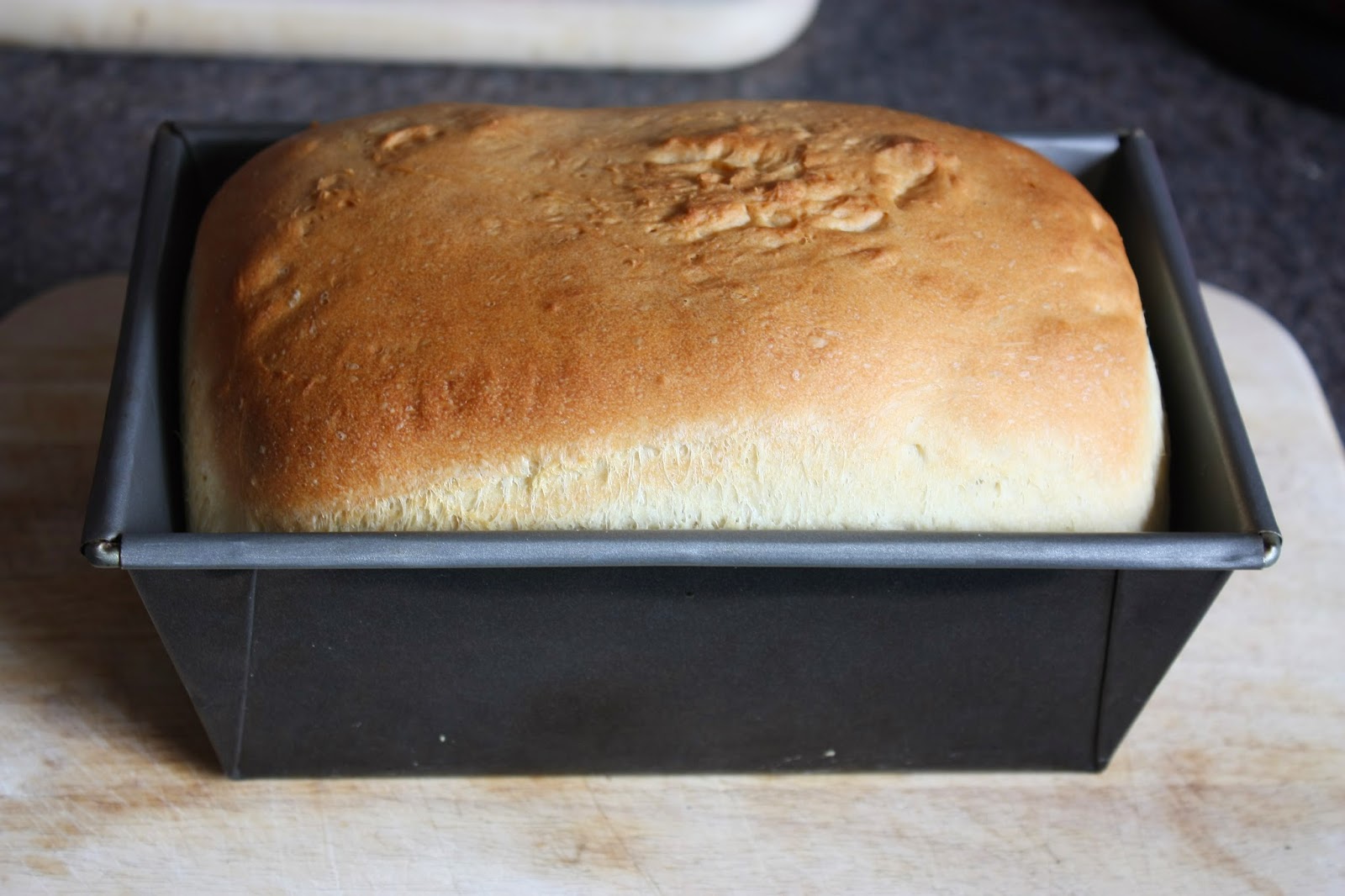 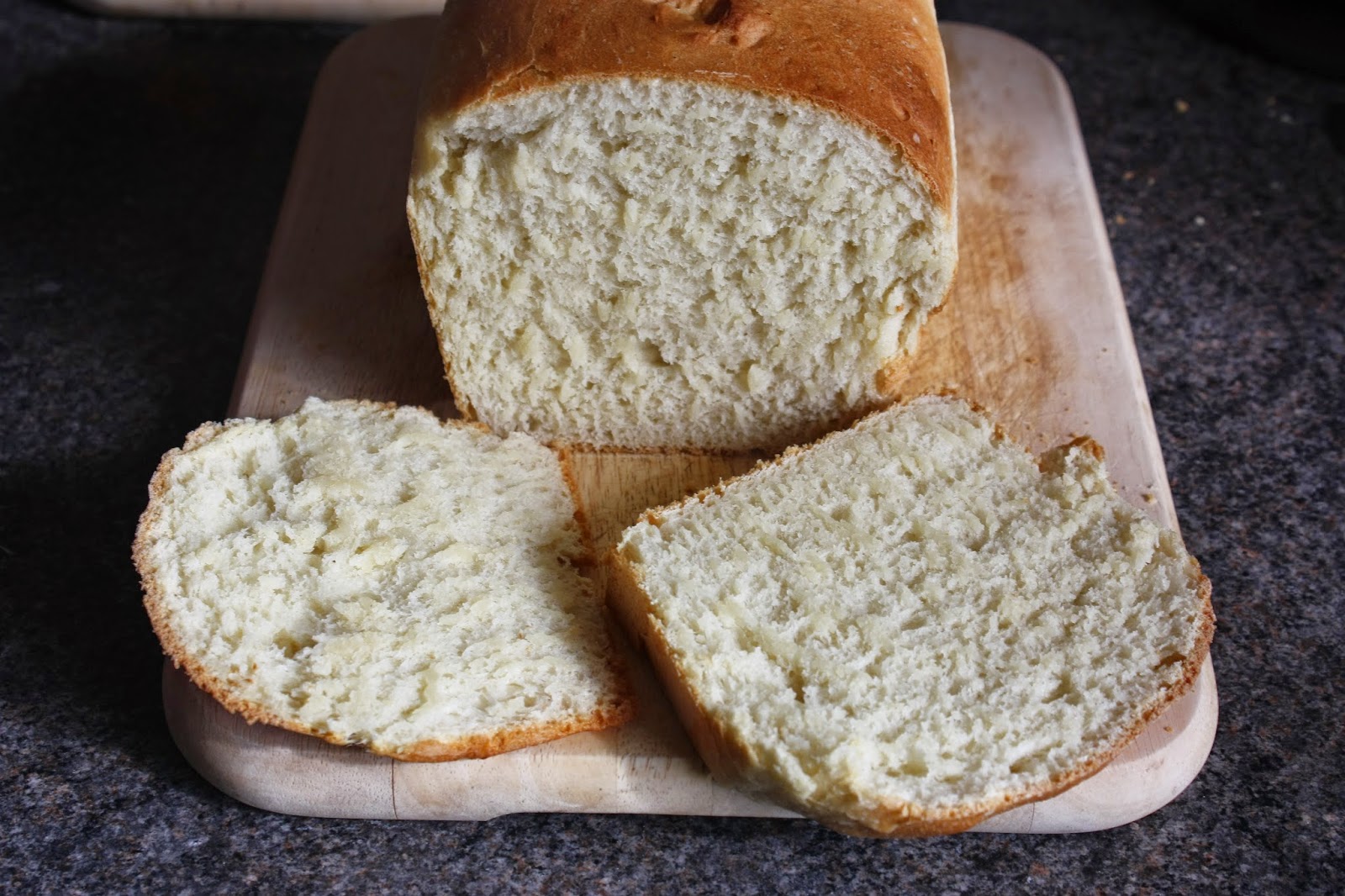 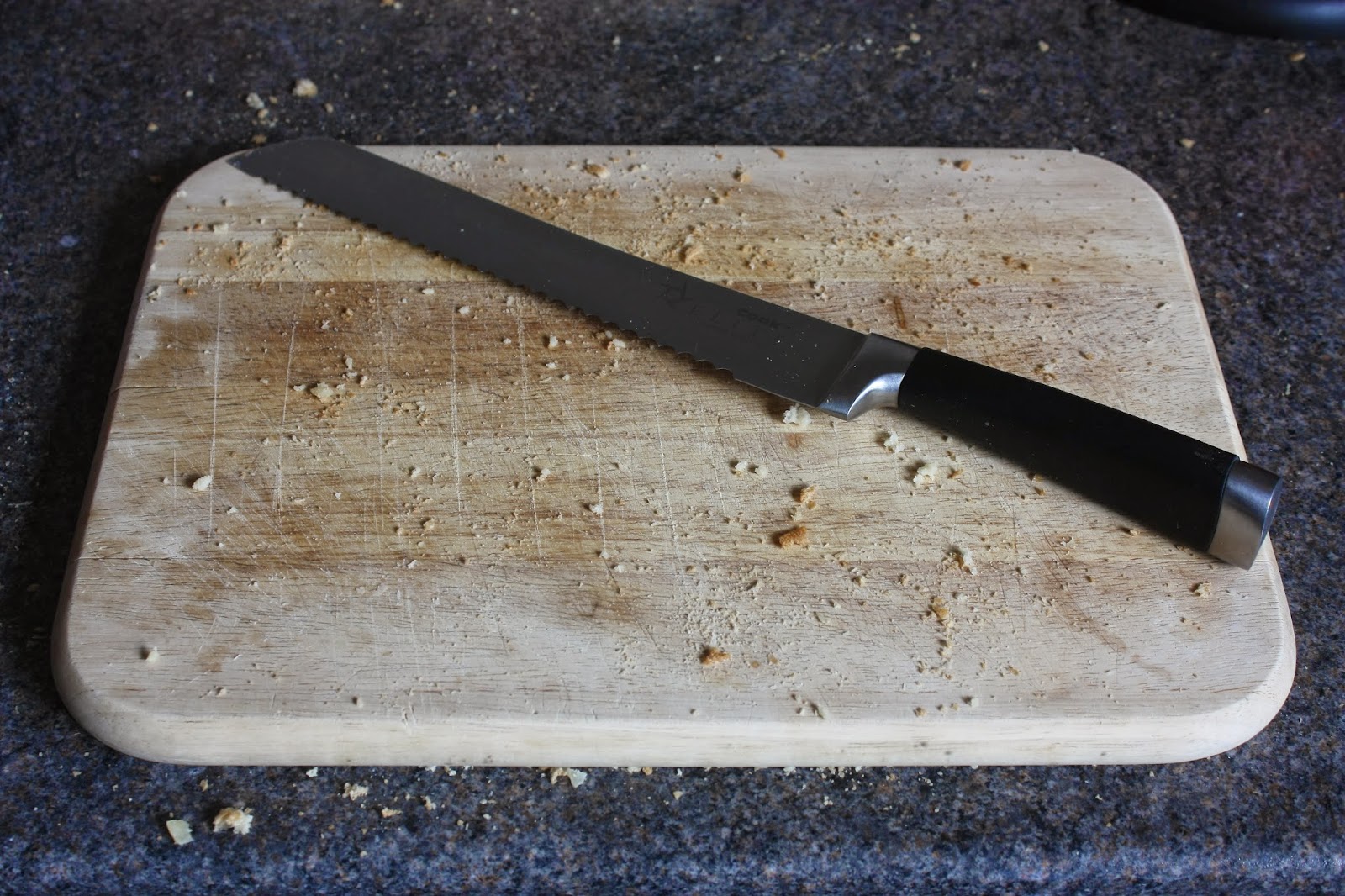 Bread wasn’t the only bake we managed on Friday. We also cooked some raspberry and white chocolate muffins. I’m always a little unsure about baking muffins as I’ve made very rubbery attempts several times (apparently this is caused by over-beating the mixture, even though I’m always convinced that I’ve been very gentle with it). I adapted the blueberry muffin recipe from the Hummingbird Bakery Cookbook (my go-to cake book, their chocolate cupcake recipe is now my default chocolate cake, it’s so light and moist), substituting the blueberries for 250 g of raspberries and 100 g of white chocolate chunks (I just chopped up a cheap bar of white chocolate rather than buying white chocolate chunks, much cheaper). The recipe calls for buttermilk, which gave the batter a rather yoghurty smell, but the final product was good, and eaten fresh there was no hint of rubberyness (they were a little rubbery the following morning though, so I guess this is a recipe that has been baked, then eaten as soon as possible). Perfect with a post-baking cup of coffee once the washing up has been done. 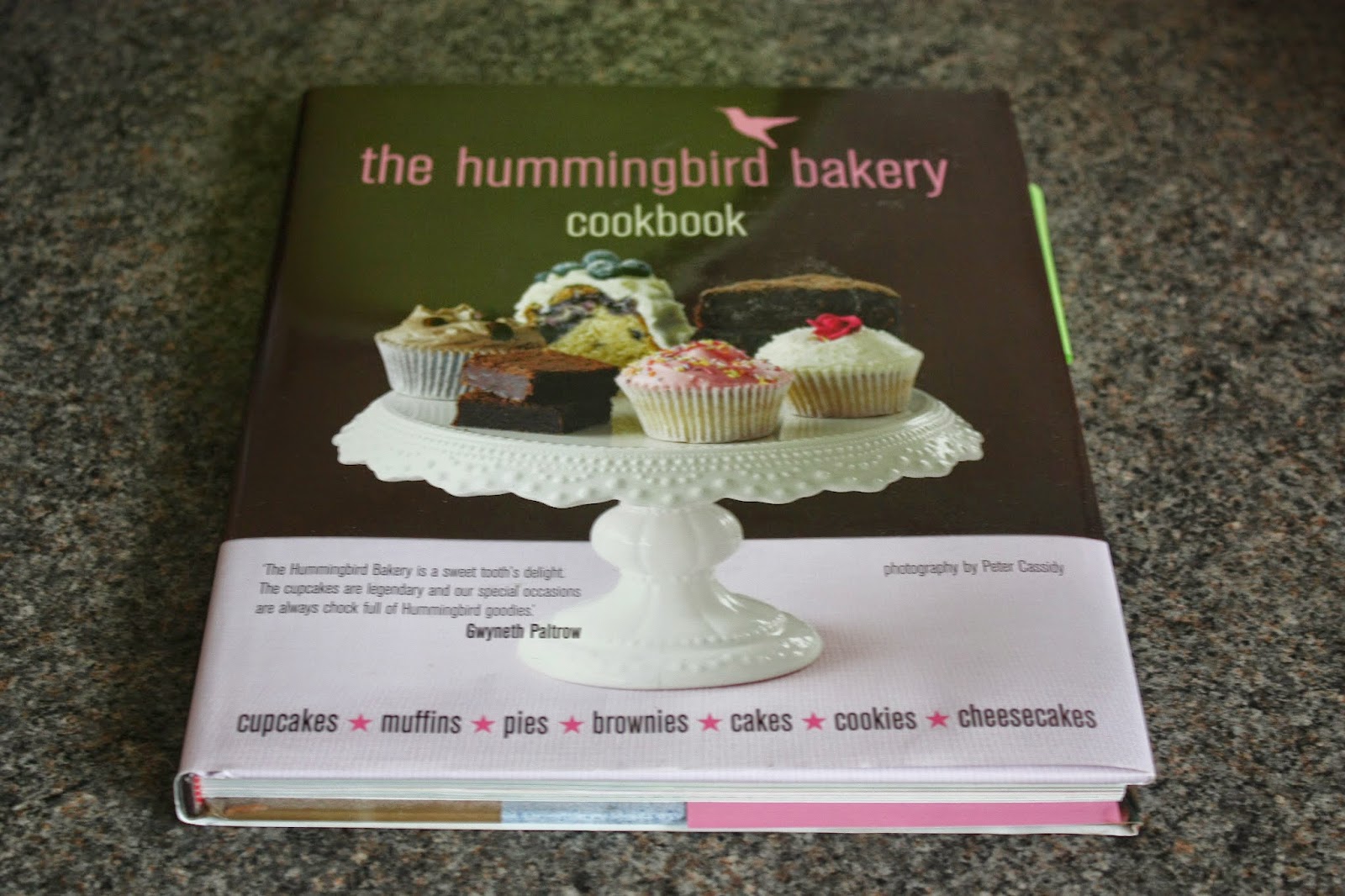 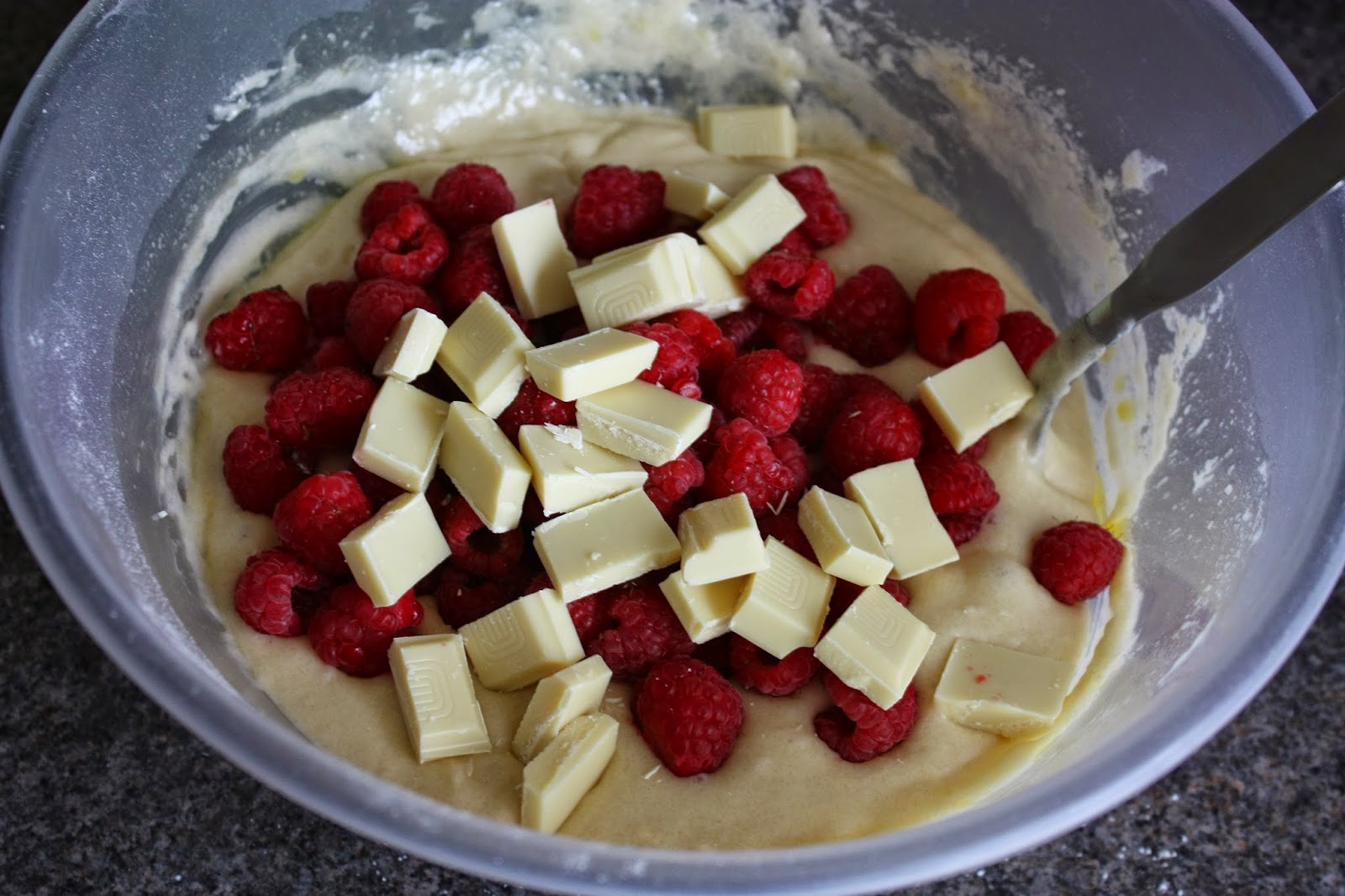 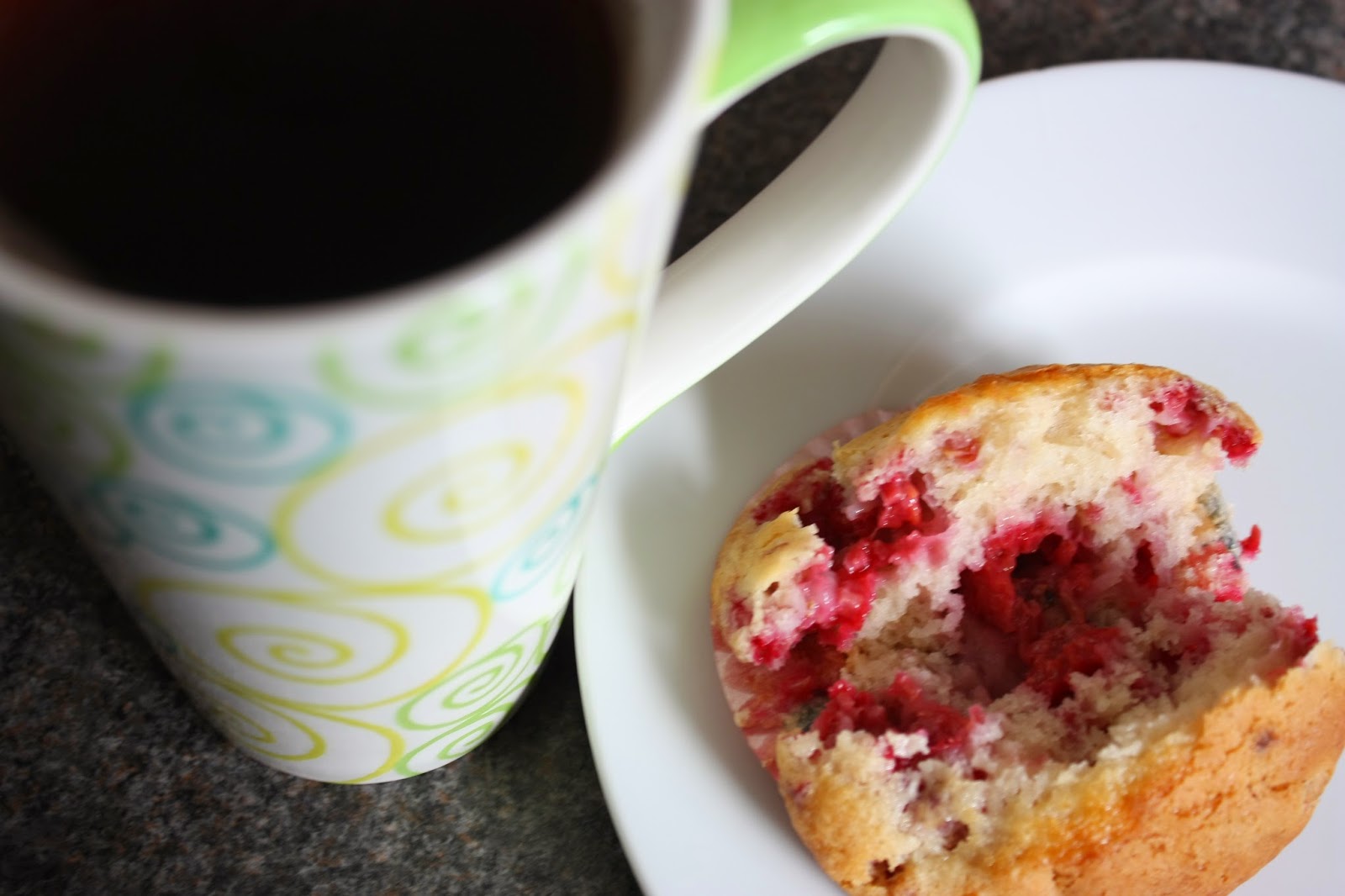