I started this blog in 2014 to share my baking efforts, which generally coincided with The Great British Bake Off being aired in the UK on a Wednesday, hence the name. Since then the blog has evolved (read, gone off in a totally different direction), and very rarely features baking. The name still remains though, and Bake Off starts again tonight, so for the next twelve weeks this blog is heading back to its roots and will be featuring a bake every week on a Wednesday (partly so I have something delicious to eat while I'm watching Bake Off; for those of you who are here for the knitting, don't worry, that's not going to disappear).

Week one is Cake Week, and running with the theme of the show seems like a good plan, so first up, we have White and Dark Chocolate Marbled Loaf Cake. The recipe is a modification of the Mocha Marbled Loaf Cake recipe from The Great British Bake Off: How to Turn Everyday Bakes into Showstoppers, with 100g molten white chocolate added in place of the coffee, because my children are unlikely to eat anything that tastes of coffee (which is a good plan as far as my getting to eat all the cake is concerned, less good in terms of getting a quiet life). The book was a present for my 30th birthday a few years ago, and I'm not sure it's even been opened before; it definitely hasn't been used in the kitchen as it's pristine! The recipes are all a little showier than I would usually make, and I've chosen one of the simpler recipes to start with. 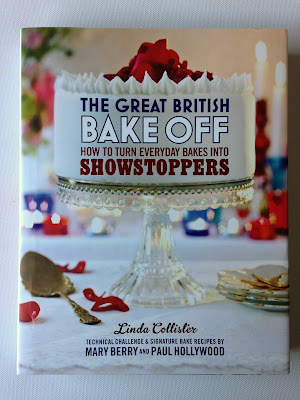 Making the cake was easy, and I'm sure the instructions were excellent, but I realised halfway through that I was winging it and not actually reading the recipe beyond the amounts of ingrediants required as I know how to make a basic sponge. I did make a bit of an error adding the cocoa powder - I tried creaming it with amount of milk specified, and when that didn't work I read the instructions and realised that I was meant to add the cocoa to the cake mixture, then add the milk. Oops. As a results there are a few lumps of cocoa in the chocolate portion, but not enough that anyone else will notice. The cake baked nicely enough; the crust was a little crisper than ideal, possibly because I didn't compensate for the extra sugar in the white chocolate (adding too much sugar to a cake can make the crust crispy), but we got round that by slicing the top of the cake off and eating the offcuts with custard. Yum. 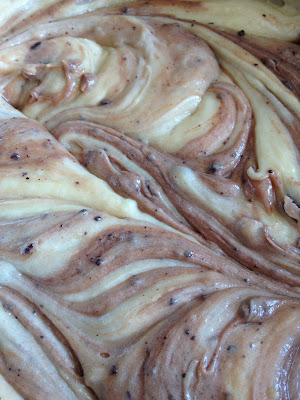 The ganache was a different matter. This afternoon it was 30 degrees, and I have no idea whether this is the reason, but the ganache *would not set*. I followed the recipe exactly, and it ended up like a pouring sauce, even after full cooling. So we have marble cake with sauce. It's delicious, but not quite what I was aiming for, not terribly photogenic, and nothing like the picture. Does anyone have a better recipe for white chocolate ganache? One that sets.


I'm off to enjoy Bake Off now. If anyone else is baking along with the Bake Off, say hello in the comments, I'd love to see your bakes. And Happy Baking!
Posted by Vikki at 19:56